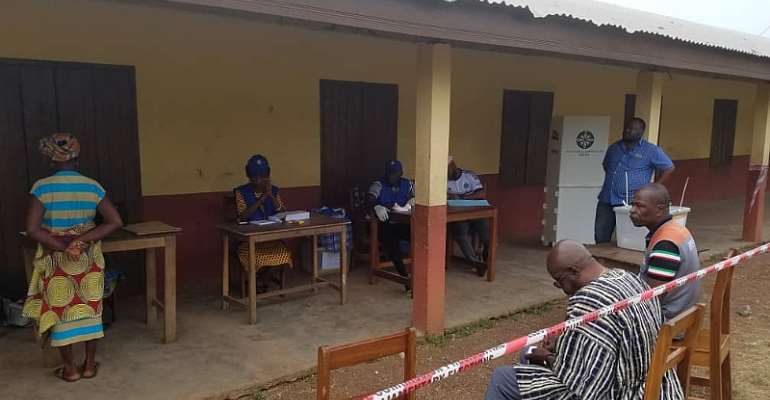 Voting is underway across the country to select parliamentary candidates to contest the 2020 parliamentary elections on the ticket of the National Democratic Congress (NDC).

In the Adentan constituency where former Gender Minister Nana Oye Lithur and former Presidential Staffer, Mohammed Adamu Ramadan are battling it out, voting started a few minutes after 7 am.

Citi News' Kojo Agyeman reported that the process has been running smoothly without challenge.

In the South Dayi constituency in the Volta Region where some 548 delegates from 57 branches are participating in the exercise, voting commenced around 8 am.

The cause of the delay was attributed to a challenge with the voter register being used which did not have the pictures of the delegates.

Some party agents together with the Electoral Commission later agreed to go ahead with the process regardless but will resort to the register with pictures if there is any disagreement over the identity of a delegate.

The South Dayi seat is being contested for by the incumbent Rockson -Nelson Etse Dafeamekpor and Frank Theophilus Kofi Dei.

In the Ningo Prampram constituency, both aspirants; the incumbent Samuel Nartey George, constituency chairman, Micheal Kwetey Tetteh were seen at the polling center in the morning.

Sam George, ahead of the polls said some persons had informed him that they have been hired to cause mayhem at the constituency to disrupt today's activities.

He warned such persons to reconsider their evil intentions or risk facing the law.

Speaking on Eyewitness News on Friday, Sam George also called on security agencies to deal ruthlessly with such trouble makers.

“I have received calls from people who say they have been hired to come to my constituency. The laws of this land must work. Any racquet who is found in my field. I am calling on the security services that if they find a macho man or land guard arrest them because I am not coming with anybody.”

“So, anybody who is coming to Ningo Prampram on Saturday to watch or cover the election and witness my victory is welcome. But if you are coming to foment trouble, you will be meet the full force of the law of the land. I am sounding that warning,” he added.

The Saboba constituency also saw a peaceful process when the voting started in the early hours of Saturday.

In Tema East, a last-minute decision to change the voting venue cause some delegates to raise concern. An aggrieved polling station executive said they were not given prior notice ahead of the change of venue.

The aggrieved party member, Issah Amadu said “it was late yesterday that they told us that they are changing the venue. Meanwhile, we have spread the news that we are voting at St. Abans Church so we had to work very hard at dawn to inform people about the change. As at now, a lot of people still don’t know the new venue. We are not happy about the way the constituency executives handled us. They have misled us.

He said that the change in venue will disenfranchise many delegates.

Voting in the Tema East constituency is taking place at the NAFAG compound at the fishing harbor.

The Electoral Commission’s Presiding Officer, Issac Asamoah told Citi News that a total number of 1,330 delegates are expected to cast their ballots at two polling station provided at the center.

At Krowor in the Greater Accra region, voting is underway to choose between Edgar Nii Kpakpo Addo and Agnes Naa Momo Lartey. About 1,300 delegates are expected to cast their ballot.

Census: People suspect us to be armed robbers, some attack u...
37 minutes ago