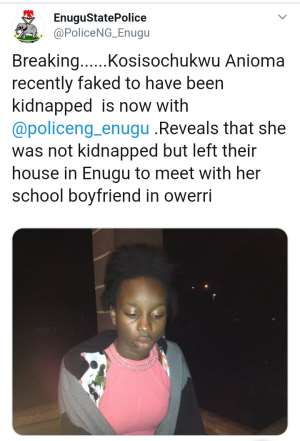 Enugu Youth Coalition has hailed the security agencies in Enugu State for busting the lies surrounding the faked kidnap of the daughter of a politician in the state.

The unravelling of the truth behind the fabricated kidnap of Miss Kosisochukwu Anioma, daughter of an aid to a former governor of the state has justified our position backed by credible intelligence that most of the negative reports emanating from Enugu State are false, malicious, fabricated, planted, mischievous and sponsored by some ungrateful politicians from the state with the aim of inciting the people, the church and the Federal Government against the peace-loving people and the government of Enugu State.

It will be recalled that the politician, in his widely reported falsification alleged that his daughter, Miss Kosisochukwu was on her way to the New Haven Market in Enugu when she was kidnapped, but security agencies who found the lady said, she traveled to Owerri to go and see her school boyfriend in the Imo State capital.

No doubt, the exposed lie is part of the wider conspiracy to discredit the government, demonise the leadership and effect a regime change through unorthodox means in due time and season.

We also have it on good authority that following the unsuccessful execution of the first phase of their evil plots by instigating violence, exploiting security lapses across the nation and manipulating the media, some of these politicians have returned home to brieve their foots soldiers and direct them on how to execute the second phase of the evil plans against the people and government of Enugu State in the weeks and moths ahead.

Some of their new plans includes but not limited to whipping up maginalisation sentiments, domination of government by people from one part of the state, taking pictures of roads leading to private farms in the villages and posting them on the internet as state of bad roads in Enugu State among others.

We therefore call on Nigerians, the good people of the state, friends, supporters and lovers of Enugu State to remain vigilant to their antics and to always rally round the state government in the ongoing fight against good governance and participatory democracy in the state.

We are assuring them of victory because darkness can never comprehend light. Where there is light, darkness must disappear. History has shown that in any confrontation between truth and falsehood, the truth must prevail.

Therefore, Enugu State is not only safe, peaceful and secure, but also hospitable and welcoming to tourists and investors who will want to invest their fortunes in the state.