Arrests and injuries as anti-G7 protesters clash with French police 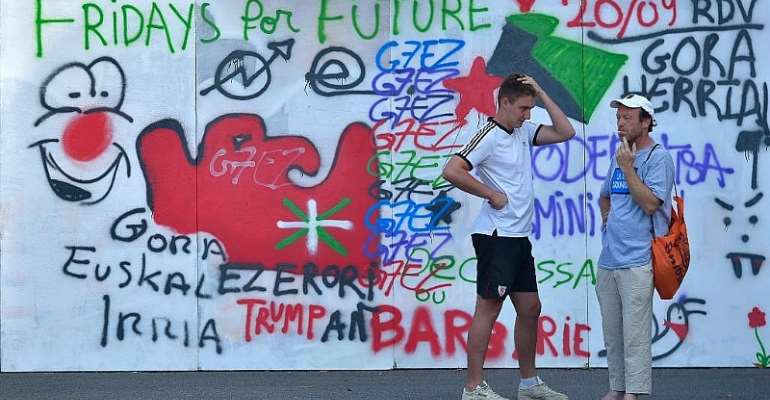 Seventeen people were arrested and four police officers slightly injured on Friday evening in Urrugne, during clashes between anti-G7 protesters and authorities. Security has been stepped up around Biarritz in preparation for the arrival of world leaders later Saturday ahead of the official summit.

Tension began on Friday afternoon, when authorities prevented between 100 and 200 people from accessing a roundabout leading to the A63 motorway linking Biarritz to the Spanish border.

Police said objects were thrown at them by protesters and after several warnings, they fired two flashballs (LBD).

Four police officers were injured when a firework bomb was thrown at them.

Some arrests were made as the protesters made their way back to their camp, situated in a former holiday resort on the seaside, some 20 kilometres from Biarritz.

Those arrested were charged with covering their face and gathering after warnings were issued, and placed in custody.

According to police the situation was under control at around 10pm local time on Friday.

The alternative summit has been underway since Wednesday, featuring discussions and workshops promoting ecological, anti-racist and anti-colonial solutions to the world's problems.

More than 13,000 police officers and gendarmes have been deployed in Biarritz and the surrounding south west region to provide security for the G7 summit which continues until Monday.

On top of that, 17 district attorneys and 300 places in jail have been made available to deal with any trouble-makers apprehended during the protest march or the summit itself.

According to the Elysée palace, Biarritz is expecting 2,000 journalists and 3,000 delegation members, adding up to at least 25,000 nights in hotels.

As of Thursday night, two access zones will be in force in the centre of Biarritz, where a pass must be shown, creating a headache for residents, tourists and shop owners alike.