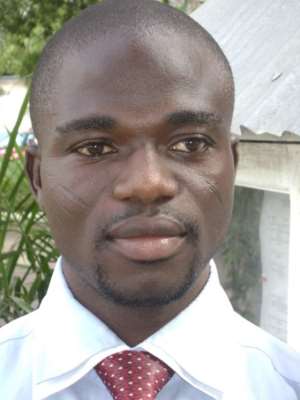 You may choose to disagree, but the fact remains that Manasseh Azure Awuni, the investigative journalist, is a real human being, and a bona fide descendant of Biblical Adam, who has an inborn susceptibility to human foibles, and therefore cannot get it right all the time.

So, some of us, as a matter of fact, cannot stand accused of allegedly harbouring risible and inherent proclivity towards the ace journalist, and more often than not, criticise some distinct works of Manasseh.

However cynical we may view some works of Manasseh, his recent Public Procurement Authority’s finest sleuth-hounding and the revelation of former President Mahama’s unwarranted and secret gift of Ford Expedition Vehicle from the Burkinabe Contractor, Djibril Kanazoe, so to speak, are the best of the bunch.

Even though it is too early to impugn culpability on anybody in Manasseh’s recent Public Procurement Authority’s investigations, we are indeed most grateful to President Akufo-Addo for taking swift and concise action by suspending the suspect and forwarding the case to the Commission of Human Rights and Administrative Justice (CHRAJ) and the Office of the Special Prosecutor (OSP).

In doing so, President Akufo-Addo has demonstrated unfailing willingness and commitment towards curbing the irrevocable menace of corruption.

And who says that Ghana’s transgressed and incompliant politicians do not often get away with murder?

According to Manasseh, the Burkinabe Contractor Kanazoe carried out a number of contracts which were secured through sole-sourcing and handpicking, which sparked allegations of former President Mahama’s influence.

Manasseh reported that Djibril Kanazoe had previously been bidding for contracts in Ghana. However, he was not successful until a middleman led him to meet the then vice president, Mahama.

Manasseh, however, stressed that subsequent to meeting the then vice president, Mahama, Kanazoe was handpicked to build the $650,000 Ghana Embassy fence wall in Burkina Faso.

According to the report, in September 2014, when officials of the Bank of Ghana met the Public Accounts Committee of Ghana Parliament (PAC), it was revealed that an amount of$656, 246.48 had been spent on the construction of a fence wall over a parcel of land belonging to the Ghana Embassy in Burkina Faso.

Unsurprisingly, therefore, PAC requested the Bank of Ghana to look into what it referred to as: “the outrageous” cost of the project.

Nevertheless, it came to light that the procurement process was violated to the advantage of President Mahama’s Burkinabe friend.

Astonishingly, during an interview with Manasseh, Djibril Kanazoe admitted that he did not put in a bid for the contract, however, the Ghana Embassy in Ouagadougou wrote to his company to request price quotations for the project. He, however, forwarded the necessary quotes and was selected.

According to Manasseh, subsequent to winning the bid, the Burkinabe contractor delivered to President Mahama, “the ‘gift’ of a brand new Ford Expedition vehicle in 2012, the same year his company was selected, again through sole-sourcing, to execute more projects” (See: ‘Burkinabe Contractor offers controversial gift to President Mahama’ ; myjoyonline.com,15/06/2015).

In a related development, somewhere in October 2010, the British media brought up a sensational report about how the then Vice president, John Dramani Mahama, was lobbied by a British Cabinet Minister to get a reprieve for the ban imposed on Armajaro Holdings, one of the cocoa buying companies who were found guilty for smuggling the commodity out of Ghana.

It would be recalled that the Armajaro Company was banned together with a few other companies, when the award winning investigative journalist, Anas Aremeyaw Anas exposed the smuggling of bags of cocoa into the neighbouring Cote d’Ivoire.

But to the utter dismay of the well-meaning Ghanaians, the British media reported that subsequent to the meeting between the then vice president, John Dramani Mahama and the British Cabinet Minister, the Armajaro Company was given a needless reprieve and then started its operations.

In sum, Ghana cannot and must not give in to the stubbornly impenitent public officials who are bent on siphoning our scarce resources to the detriment of the poor and the disadvantaged Ghanaians.

May God bless our Homeland Ghana!