By Amal Bellaloufi with Aymeric Vincenot in Paris 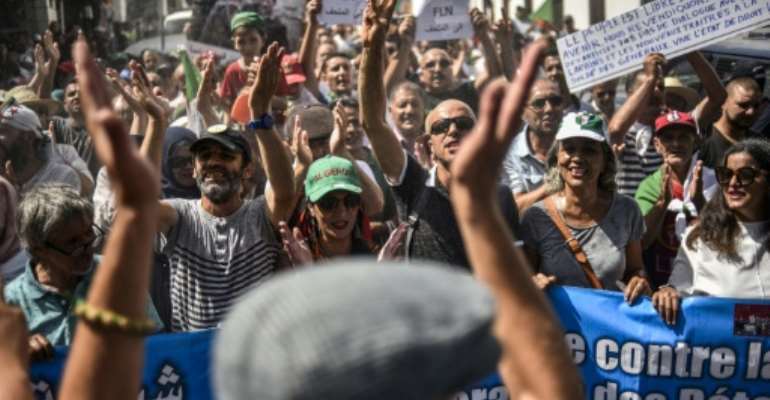 Protesters called for the resignation of the army chief and other political figures in Algeria on Friday, as demonstrations moved into a seventh month. By RYAD KRAMDI (AFP)

Algerians on Friday were back on the streets demanding an overhaul of the political system as the country's protest movement entered a seventh month with no let-up in sight.

Crowds of demonstrators who thronged the capital and key cities across the North African nation rallied to cries of a "Free and democratic Algeria" and a "Civil state, not a military one".

They directed their wrath at army chief Ahmed Gaid Salah, who has emerged as the key powerbroker since veteran president Abdelaziz Bouteflika resigned in April in the face of mass protests.

They also vented their ire against Karim Younes, an ex-speaker of the lower house appointed by authorities to head a national dialogue to pave the way for presidential elections.

"Karim Younes does not represent us and Gaid (Salah) does not rule us!" the demonstrators shouted.

They also chanted: "We will not be fooled by any dialogue. The people are conscious. They are not idiots."

The protest in Algiers dispersed calmly in the late afternoon, while demonstrations in other major cities likewise passed off without disturbances, according to local journalists.

Elections planned for July 4 were postponed, after the only two candidates -- both little-known -- were rejected by electoral authorities.

The demonstrators have repeatedly demanded key regime figures step down -- and credible institutions be established -- before any polls.

The protesters have so far maintained a united front, taking to the streets every week since February. 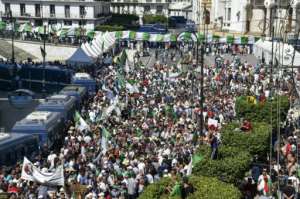 Only a few opposition parties have so far agreed to meet with Younes and his dialogue committee, including a party headed by former prime minister Ali Benflis.

Last week the ex-premier said that presidential elections were the only way of emerging from the political crisis that has gripped Algeria for six months, so long as the polls were free and fair.

But on Friday the demonstrators rejected his views, chanting "Benflis to the rubbish bin".

Friday's rally began after demonstrators observed a minute of silence for five young people who were killed late Thursday in a stampede at a packed rap concert in Algiers.

Dozens more were injured in the crush as fans thronged an entrance to the August-20 Stadium, ahead of a performance by rapper Soolking, who has dedicated the song "La Liberte" (Freedom) to the protest movement.

"We were supposed to celebrate six months of (rallies) today but yesterday's tragedy has plunged many families into mourning," said protester Lamia Boukahari.

She said the concert's organisers should be "held to account", noting that the stadium was old and too small to accomodate the more than 30,000 people estimated to have attended.

Another protester said the deaths of the young concert goers reflect the corruption prevailing in Algeria.

A string of prominent politicians and businessmen once close to Bouteflika have been questioned or detained over alleged graft since the veteran leader resigned.