Endorse my candidature for consolidated development-former Daboya MP to delegates 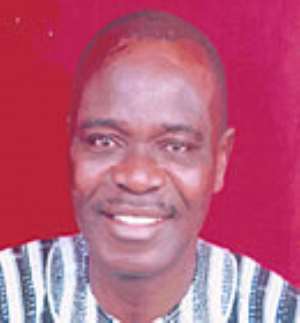 Ahead of Saturday's polls, the erstwhile Member of Parliament for Daboya/Mankarigu constituency, hon. Baani Abudu Nelson has entreated delegates to endorse his candidature for a more consolidated development.

In an exclusive interview with ModernGhana's Ananpansah B Abraham, he said his desire to reclaim the "lost seat" was to enhance the many gains he made, whilst serving as legislator for the constituency.

He insisted that he lost the 2016 election on principle, adding that, the discredited biometric register of the party offered an opportunity for some candidates to manipulate the parliamentary primaries to their undue advantage.

The party's biometric register which sought to capture about 1.5 million members in his view, created a safe haven for his contenders to register non-NDC members. And that, he respected and rather empowered the party leadership in the constituency to register true party members at his own "unforeseen detriment", adding that," I lost on principle ".

Sector by sector, he enumerated his many achievements.

In the area of health for instance; he disclosed that he personally registered over 2000 underprivileged people from the constituency under the National Health Insurance Scheme and renewed over 2000 NHIS cards for the vulnerable. In a bid to improve the health care delivery, he donated nine(9) motorbikes to the North Gonja District Health Directorate and provided a tricycle to the Daboya Polyclinic for carrying of drugs from the riverbank to the clinic.

Under education; he rehabilitated Markazia E/A primary and Junior High Schools in Daboya and created access road to Daboya. He provided five(5) motorbikes to the District Education Directorate for onwards distribution to the various circuits to enhance effective supervision.

Among others, he supported underprivileged women groups in income generation activities such as gari processing by supplying Gari Processing Machines to the women. He reshaped many deplorable roads including;the Tidrope-Tidrope Fishing Camp road and Kabgal to Gou road.

He also lobbied and successfully executed a number of GETFUND projects such as;the construction of 6-unit Classroom Block with auxiliary facilities for Tarbiat E/A Primary School at Daboya and a Teachers Quarters at D/A Primary School at Mankarigu inter alia.

In terms of numbers, he said the party won with a margin of over 2,000 votes in the 2012 elections when he was the candidate, but in 2016, even with power, the candidate won with only 650 votes.

The party thus, need a more viable candidate who is appealing to all the political divides to retain the seat and increase the votes.

Ahead of tomorrow's primaries, hon. Nelson Baani Abudu who is in the race with other contenders to represent the NDC in the Daboya/Mankarigu constituency in the 2020 elections believes he is the best candidate to perform the magic for the party.

To stimulate the youth front by implementing consultative policies of inclusiveness, whilst lobbying for developmental projects.

Biography:
Mr.Nelson Baani Abudu was born on 4th October 1962, at Daboya in the Savannah region.

He started his early education at Daboya and proceeded to Damongo Secondary School where he obtained a G.C.E O' Level certificate.

He holds a Bachelor of Arts Degree in Publishing Studies and a certificate of Entrepreneurship and Small Business Management from the Kwame Nkrumah University of Science and Technology.

As a par excellent customs officer, he rose through the ranks and became the officer in charge of the Investigative Unit of the Customs Exercise and Preventive Service-Ashanti region in the year 2010.

From 2010, he worked at the Special Operation Unit of the Ministry of Finance and Economic planning until 2012 where he was elected as the Member of Parliament for Daboya/Mankarigu constituency on the ticket of the NDC.