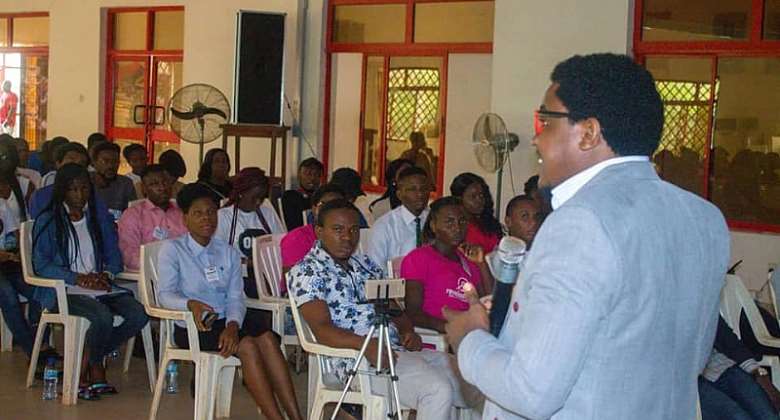 A famous voice for the SDGs, Anna Ruggerini said – “The global system needs new generations and youth solutions to achieve all SDGs and address the current challenges of the 21st Century. The youths have a key role to be an agent of change and owner of the future”. This statement aligns with those of several world leaders galvanizing the youths toward joining in global discourses and advocacies and rising above the challenges of their young ages to own responsibilities. Reinforcing this push is Mr. Prince Agwu, a lecturer with the Department of Social Work, University of Nigeria, Nsukka, and a known resource person in the area of enhancing youthful capacity and peak performance. This time, Mr. Prince in two weeks spoke at the Nsukka and Enugu Campuses of the University of Nigeria, advocating for youthful voices and actions toward Nigeria’s attainment of the SDGs by 2030. We present a summary of his presentation in ensuing paragraphs.

Mr. Prince commenced the presentation with highlights of the 17 goals. He argued that all 17 goals would be great for Nigeria to achieve. However, there is the need for Nigeria to critically reflect through the 17 goals with the peculiarities of the country in mind and identify those that are more necessary to achieve. The idea is to have a prioritization of the 17 goals in order to spot which should be our focus as a country. Mr. Prince did a summary of prioritized SDGs for Nigeria and then came up with the frame – HEJP which represents Health, Education, Job, and Politics. The formulation of this frame of his was particularly influenced by the key indices used to measure Human Development across the world. These indices are long/healthy life, education index, and standard of living. Nigeria has never had above a 0.55 Human Development Index score, unlike co-oil producing countries (Norway, Switzerland, and the United States) that are close to “1” (perfect Human Development Index [HDI] score). He mentioned that just five countries in Africa have HDI score above 0.7, and they are, Gabon, Botswana, Tunisia, Algeria, and Libya. This is unlike the South American, North American and Asian continents (they had same footing with Africa some years back) where almost all countries there rank above 0.7. It is for this reason he judged that Africa and even more, Nigeria, would have HDI scores improved if they pay attention to the HEJP frame, thus, scaling up their pace toward fulfilling the SDGs.

On health, Mr. Prince pointed at the Universal Health Coverage (UHC) as the only viable option for Nigeria to come out of its failures in the health sector. The UHC is a global goal that operationalizes the SDGs on health. It means that by 2030, countries of the world should have successfully made quality healthcare available and affordable, such that service users do not undergo financial hardship in the process of utilizing healthcare. This is where He quoted a boss of his, Prof. Obinna Onwujekwe who will always say, that Nigerians are just one sickness away from poverty. Literally, it implies that all the time, Nigerians are faced with a kind of sickness that would require they stop household spending, sell their properties, and even go cap-in-hands begging for more funds. Mr. Prince appreciated Nigeria for making healthcare services available via an efficient distribution of 30,000 primary healthcare facilities (PHCs) across the country. Sadly, just about 20% are said to be functional, even though they face serious quality concerns. Overall, Mr. Prince said that one cannot expect healthcare in Nigeria to be any better when not even up to 10% of the population is insured (i.e. majority still pay out-of-pocket or patronize expensive private facilities, and it is worse for rural populations); when health workers are barely employed or paid commensurately to services they render; when health facilities especially those in the rural areas are under lock-and-key and no one is saying anything, and when the facilities are poorly equipped with no or dilapidated social amenities around. Yet the leaders of the country are always about sharing billions of naira among themselves to purchase exotic cars and live in flamboyance at the expense of the lives of their citizens. Additionally, He pointed out cases of religious leaders increasingly being the deciders of when, where and how their members utilize healthcare. The influence of culture is also situated. And these failings result from the dearth of relevant education for religious clerics and custodians of indigenous cultural practices.

Currently, about 13.5million kids are out of school. The factors He identified responsible for this are around issues of gender, geography, culture, and poverty. He revealed that more of the kids are in the North, and the four factors mentioned above are responsible for this, in addition to the terrorism crisis in the region. However, in places like the Niger Delta where floods could drive children away from schools, and oil violence could mean that school-aged children would join banditry and militancy to rise up against their perceived enemies, could account for children shunning schools. Therefore, advocacies must streamline concentration on these factors to return children to school, else the figure would rise again, as it did from about 10million to the current figure. An added solution to this is for Nigeria to place emphasis on merit, structure, and reward in a bid to encourage schooling. By merit, best brains should be retained across systems to prevent brain-drain; by structure, education should have an increased budget, and infrastructure together with the quality of staffing improved; by reward, a best graduating student from a University can’t be given 5000naira or less, and allowed to struggle through acquiring further degrees even without a job. When these indices are introduced or restored, the value of schooling increases and becomes attractive. This would open up the entrance door, and shut the exit.

Of course, a country with the highest number of persons in extreme poverty and with an unemployment rate above 23% is indeed in trouble. In the social sciences, it is believed that strong relationship exists between poverty, absence of jobs, and increase in crime rate. It is no surprise why Nigeria at the moment battles with several forms of crime and making no headway in reducing the occurrences. With the failure of Nigeria in areas of Health, Education, Jobs, and Politics, under the leadership of the old generation, the need for younger persons to generate impacts can’t be in contest. Moreover, these younger persons are the future, so, they must begin to take responsibility themselves, or challenge the older ones to do the right things with the future in mind. To achieve this, younger persons must pay attention to their values, by shifting attention to the community other than their individual selves. This passion would drive them to intensifying advocacies including mobilization against erring leaders, political participation, innovative partnerships, mobilization of resources from high resource to low resource areas and even from the haves to the have-nots, building platforms for engagements and communication to review and suggest actionable efforts toward the SDGs, and utilizing the edge they have in technological competence to save the situation.

Conclusively, Achebe once asked – Nigeria, has lost the 20th century, are we to sit back and have the 21st century suffer similar loss? Obviously, if the 21st century suffers same fate, the younger persons should be held responsible for not doing the needful. They have the voice, the smartness, the energy, and the population. As a matter of fact, the SDGs would see speedier realization, only if young persons join and stay in the conversation.

Prince Agwu is an academic staff and researcher with the Department of Social Work, University of Nigeria, Nsukka. He also shares an affiliation with the Health Policy Research Group. His research expertise covers social policy and social determinants of health as evident in his publications in both local and international journals, including those that are impact factor rated and well indexed. He is also a peak performance strategist and public speaker.