The Insidious ways in Uganda opposition are scaring! 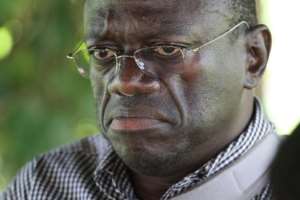 I’m not ashamed of supporting Besigye and neither should I be. I am just embarrassed at some people with their pure nastiness toward a man who stands for restoring democracy in Uganda, and clean politics because he is, without a doubt, clean himself. It was Museveni who tried to link him up to some corruption scandals around 1990s, but it didn't stick either. However, I'm surprised that some people supposedly in the opposition, in their effort to promote their candidates, are again bringing up the same stuff Museveni tried to use against Besigye- I'm talking about the issue of junk helicopters and procurement of army gumboots.

For your information, the matter of the procurement of gumboots, in which Besigye was alleged to have colluded with the supplier and helped them evade taxes in exchange for personal again, was investigated by First, then Army Commander, Mugisha Muntu, second -by then minister of Defence, Amaama Mbabazi , and thirdly -by then Attorney General, Abu Mayanja- all found no evidence of corruption.

Branded a failure after standing against Museveni four times - maybe you should follow Kenyan politics, and see how many times Raila Oddinga has been standing for presidency. Read up on election rigging before slamming anybody. Criticise him for not trying to keep former FDC women such as Beti Kamya, Anywar( maama Mabira), Anne Mugisha, e.t.c. happy, but don't judge him on elections. Criticise him because he wears hooded shirts , wears jumpers rather than suits or doesn’t spend enough time with his wife and kids. Criticise him because he actually cares too much for democracy in this country, to the extent of losing his younger brother in prison. What is the country coming to?

Branded a mole, simply because his wife is a former girlfriend of Museveni - read up on the history of Byanyima family and their special relationship with Museveni. Oh come on!!!!! Museveni does something descent for once to support a fellow Ugandan for an international job, but we all lose the big picture simply because we either hate Museveni, or because Winnie is a westerner. I despair that people don’t see this objectively or just don’t care.

If you look at the abuse Besigye has received it is because he is a threat to the status quo. He doesn’t want the sick, disabled, homeless, underprivileged, elderly, young or anyone without the comfort of financial abundance to die unnecessarily, he is furious at a government where murders and burglary have increased and police are in tatters, he wants opportunity for those branded as less fortunate. He wants justice, equality, community, opportunity. His politics are not to be feared and I can not see why they are. He calls for peaceful defiance measures against the government. He is the only opposition leader who tries to look after the families of his supporters that end up either dead, or in jail.

Besigye isn’t about looking after just the poor, or just the rich - (whose divide has increased tremendously)but about caring for and being responsible for each other- all of us. How is that a bad thing? Everyone moans that all politicians are the same. Finally one who is not and the country goes mad! He has never pretended to have a damaged kidney while under detention, he has never smoked weed, he has never made things up simply to get headlines in newspapers, he has never character assasinated his opponents just to build his own political profile.

The attitude of some opposition supporters and ideas scares me because it reaffirms all the fakery, materialism and greed which I have seen destroy people I care for whilst poverty and lack of opportunity has killed others.At a time in my life when the system failed me and has failed others, you would think that people would stick with one person who has been with them from the start in thick and thin, but, instead, they are all over the place. If you hate this man, I would ask why? Because for the the life of me I can’t understand it. Hate is ugly.

Injustice is all around, a lot of Ugandans live it, fight it and watch it daily - most of us do, but it also seems many of us are scared of changing it. Or even to be associated with wanting to change it. But I am not ashamed. I believe we need change. Elections or not, we need to face up to the grass root issues in our country and accept that we can't just support whoever sings nicely to us, because this is a revolution not a singing competition.