A Look At Ghana – Switzerland Relations 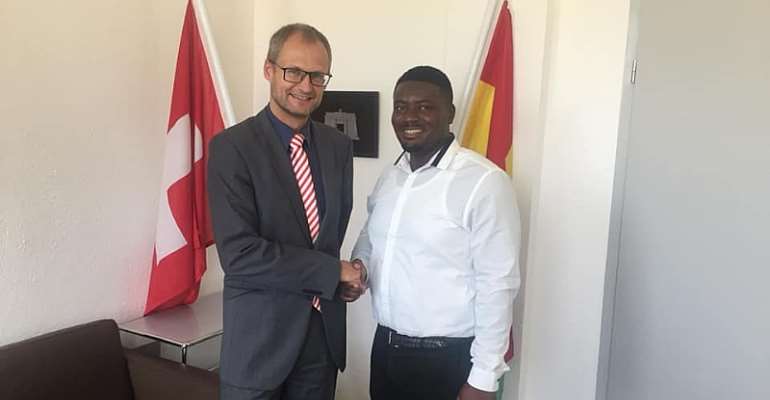 The Federal Charter (Bundesbrief) of 1291 unified three cantons in the area of modern-day Switzerland which is considered one of the country's most important founding documents. The Bundesfeier is Switzerland's national holiday, a day observed as holiday for the general population, schools and most businesses. Switzerland has been celebrating National Day on August 1 since 1891.

This year’s celebration of the Swiss National Day in Ghana took place on Wednesday 14th August 2019 at the residence of the Swiss Ambassador in Accra. The event was attended by members of the diplomatic corps, government officials, traditional rulers, representatives of Swiss businesses in Ghana, affiliates of the Swiss embassy and members of the media.

As part of the Swiss National Day celebration, I had an interaction with His Excellency Philipp Stalder, the Swiss Ambassador to Ghana about the bilateral relations between Ghana and Switzerland. Ghana and Switzerland have maintained good relations and can look back on a long-standing exchange which has been fruitful for both countries. Switzerland recognized Ghana on 6th March 1957, the day independence was declared and the two countries established diplomatic relations in 1960.

Prior to that, the two countries have had long standing relations which can be traced to the activities of the Swiss Christian missionary society, Basel Mission, in Ghana. The Basel Mission was active from 1815 to 2001 and September 2015 marked the 200th anniversary of its engagements in Ghana which planted the now Presbyterian Church of Ghana in 1828.

Describing his Ghanaian assignment, Ambassador Philipp Stalder who previously served in Asia and Southern Europe expressed his excitement about being in Ghana as he emphasized on his enthusiasm about the prospects of the country and the bright future ahead for the citizens. He is convinced there is a lot to be done by both countries in various sectors to realize this and also for mutual benefit of both countries.

The main focal points of the relationship between Ghana and Switzerland over the years have been development and economic cooperation – trade and investment. “The Swiss embassy in Ghana which is the representation of the Swiss government has a visa section to cater for persons wishing to travel to Switzerland for various reasons. There is the cultural section handling cultural activities and we are also catering for some four hundred Swiss nationals and about 40 Swiss companies across Ghana making it a full-fledged embassy”, Ambassador Stalder indicated.

Speaking on the direction of the embassy under his leadership, Ambassador Stalder stated that his priority is to strengthen the bilateral relations between Ghana and Switzerland through key projects and initiatives to help in building the human capital and production base of the country.

He added that “the Swiss government contributes to the development of Ghana through our economic development cooperation program. Earlier this year, for example, we launched our new Ghana Private Sector Competitiveness Program, a comprehensive program, which aims at contributing to the creation of more and better jobs in the private sector. The program specifically aims also at reducing the red tape for businesses and has the ambition to develop the cashew nuts and oil palm value chains”.

According to the Ambassador, there is another program of importance in the agriculture sector. “Let me mention another innovative program of our development partnership - the Swiss Platform for Sustainable Cocoa. This new initiative aims at improving the livelihoods of cocoa farmers. This will be achieved through joint learning and innovative public-private partnership approaches with the Swiss private sector”, he said.

Ghana is one of the thirteen priority countries of Switzerland’s State Secretariat for Economic Affairs (SECO) for economic development cooperation. SECO's program aims to contribute to sustainable and inclusive economic growth and to reduce poverty. The focus in Ghana is on strengthening public institutions and public services and improving the competitiveness and diversification of the Ghanaian economy.

Ambassador Stalder specified that the cooperation concentrates on “strengthening the framework conditions for growth and trade and unlocking the productive potential of Ghana’s private sector, with interventions targeted at public financial management, tax reforms, energy sector reforms and measures aimed at improving the investment climate, fostering financial inclusion and promoting the development of export-oriented agricultural value chains”, he added.

In his concluding words, Ambassador Stalder is looking forward to a closer collaboration with the Ghanaian government and all relevant agencies to work towards achieving a Ghana beyond aid.