This is much better: Akufo-Addo is seriously pushing the ‘Jonahs’ off the boat! 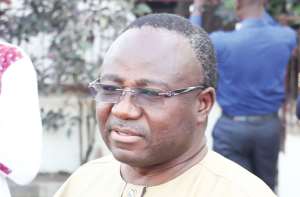 The suspension of the Chief Executive of the Public Procurement Authority (PPA) by President Akufo-Addo following Manasseh Azure Awuni’s documentary, dubbed, ‘Contract for sale’, was a step in the right direction, as a matter of fact.

Clearly, by suspending the suspect and forwarding the case to the Office of the Special Prosecutor and the Commission for Human Rights and Administrative Justice (CHRAJ), President Akufo-Addo has exhibited the seriousness and the commitment towards the insuperable battle against the canker of corruption.

Unquestionably, so far, the vast majority of President Akufo-Addo’s appointees are living up to the expectations of the good people of Ghana with only a handful of appointees allegedly ‘misbehaving’.

We should, in fact, not lose sight of the fact that we are all descendants of the old man Adam, and we are inherently imperfect human beings, and therefore susceptible to human foibles.

Clearly, therefore, we should not and cannot expect only morally upright individuals in the Akufo-Addo’s government, far from it.

But that said, it would be a worthwhile to throw the recalcitrant “Jonahs” overboard than to procrastinate and allow the boat to sink and perish precious and innocent lives.

In fact, by appointing Mr Martin Amidu as the Special Prosecutor with a mandate of investigating, prosecuting and retrieving stolen monies from greedy and corrupt public officials, President Akufo-Addo has shown the seriousness and the commitment towards the fight against corruption.

Ghana, so to speak, has been losing billions of dollars since the adoption of the Fourth Republican Constitution to the remorseless nation wreckers who take delight in swindling the state to the detriment of the poor and disadvantaged Ghanaians, and yet the methods employed by the successive governments in fighting the apparent canker have been extremely disappointing.

Despite the pernicious effects of corruption, the previous administrations and their Attorney Generals failed woefully to cooperate with other interested stakeholders to investigate, prosecute and retrieve the stolen monies from the stubbornly impenitent nation wreckers.

It is for this reason that some of us are most grateful to President Akufo-Addo for showing true leadership by establishing the Office of the Special Prosecutor.

We should, therefore, not expect Mr Martin Amidu to dampen our excitement by leniently asking the suspects to return their loots without the essential prosecutions.

Obviously, the benign and somewhat lenient approach would not curb the widespread sleazes and corruption which have been retrogressing Ghana’s advancement thus far.

How on earth would individuals turn away from their crimes if the only available punishment for stealing the public funds is a mere plea to return their loot?

Let us be honest, much as the paradox of exposure is somewhat relevant in the fight against the canker of corruption, it is not an isolated tool, it goes hand in hand with prevention and deterrence.

Indeed, in the case of the Public Procurement Authority’s Chief Executive, the best President Akufo-Addo could do was to push the wayward ‘Jonah’ off the boat to avert any catastrophe.

After all, wasn’t Biblical Jonah thrown into the sea for causing the boat to sink through his actions and inactions?

According to the parable of Jonah, Jonah was called upon by God to Go to Nineveh for evangelical assignment. But Jonah got up and fled from the LORD to Tarshish. He went down to Joppa, secured passage on a ship bound for Tarshish, paid the fare, and boarded, intending to go with the mariners to Tarshish to escape from the LORD.

Then the LORD sent a great wind over the sea, and a severe storm broke out. It seemed as if the ship were about to break up.

At this point the mariners became terrified, and each man cried out to his gods. They began to throw the cargo into the sea in order to lighten the vessel.

But Jonah had gone down into the vessel’s hold, had lain down, and was fast asleep.

So the captain approached him, and told him, “What are you doing asleep? Get up! Call on your gods! Maybe your god will think about us so we won’t die!”

Meanwhile, each crewman told another, “Come on! Let’s cast lots to find out whose fault it is that we’re in this trouble.” So they cast lots, and the lot indicated Jonah!

So they interrogated him: “Tell us, why has this trouble come upon us? What’s your occupation? Where’d you come from? What’s your home country? What’s your nationality?”

“I’m a Hebrew,” he replied, “and I’m afraid of the LORD God of heaven, who made the sea—along with the dry land!”

In mounting terror, the men asked him, “What have you done?” The men were aware that he was fleeing from the LORD, because he had admitted this to them.

Because the sea was growing more and stormier, they asked him, “What do we have to do to you so the sea will calm down for us?”

Jonah told them, “Pick me up and toss me into the sea. Then the sea will calm down for you, because I know that it’s my fault that this mighty storm has come upon you (ISV-Jonah1:1-15).”

Interestingly, we can glean from the parable that Jonah graciously volunteered to be taken off the boat in order to save the lives of his fellow passengers.

The overarching question then is: in today’s Ghanaian political landscape, can we find many “offending Jonahs” who would voluntarily leave their lucrative posts without a push?

Let us face it, we can only develop as a nation if we hold people who are in important positions into account at all times.

The fact remains that we are lagging behind the rest of the world in terms of development, largely due to lack of accountability on the part of people we often appoint to important positions.

I would, therefore, like to believe that the right remedy for a possible attitudinal and behavioural change amongst public servants is to resort to dismissal upon poor performances and corrupt practices.

Why must a public servant hold on to his/her position despite an admissible evidence of malfeasance and dereliction of duty?

Mind you, discerning Ghanaians voted the NDC government out of power in the 2016 general election as they were not enthused about the way President

Mahama and his appointees were managing the affairs of the country.

The good people of Ghana, therefore, found in NPP, a redeemer, in whom they reposed their trusts to set them free from the NDC government’s unpardonable economic bondage.

So, I would like to believe that President Akufo-Addo and his NPP government are not ready to disappoint the good people of Ghana, whose invaluable efforts brought about the needed change.