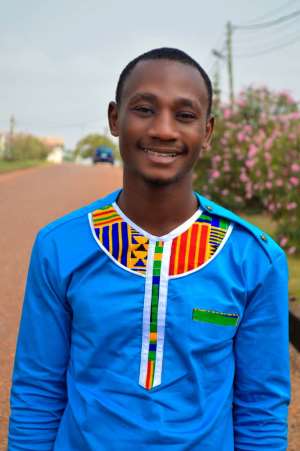 Oscar Komla Bedzra's statement comes at the back of controversies that had sparked between NDC's John Dramani Mahama and the ruling government relative to the free Senior High School Policy.

"The NPP is restlessly trying to create an impression on the minds of Ghanaians that, the NDC will cancel the free SHS policy. The next NDC government will not cancel the policy because it is a constitutional provision under article 25(1)b of the 1992 constitution". Mr.Bedzra said.

In a statement released by the Ho Central NDC activist, he indicated that the opposition NDC will not cancel the policy, but rather find ways of repositioning the policy to suit educational standards.

Below is the full statement :
fellow Ghanaians, I greet you all .....!
I write to clear doubts concerning the free SHS and it's political gimmicks of the NPP .

Indeed, is it very sad and disheartening to see a political party create an impression on the minds of the general populace to mean that their opponents will cancel free Senior high school policy. The NDC is rather committed to repositioning the policy through stakeholder consultations which would converge ideas, suggestions, and recommendations from the various stakeholders of the educational policy.

We as a political party are committed to ensuring the best for mother Ghana most especially in the educational sector.

It could be recalled that the erstwhile NDC government, led by his Excellency John Dramani Mahama started this very policy in which he commenced the establishment of day senior high schools, specifically E-Blocks across the country. This very move by the immediate past president was commended by many individuals including persons from the current government (at their time in opposition) as well as some international bodies of concern. This is a signal that was extremely obvious to the good people of Ghana until the NDC's exit from power in 2016.

Fellow Ghanaians, we at this time need to compare and contrast the actions and inactions of both H.E John Dramani Mahama as well as H.E Nana Addo Danquah Akufo Addo, relative to how the policy was, as well as how it is.

The future of our dear children is of immeasurable priority as compared to the mislead of political parties such as the NPP and we cannot afford to sacrifice the good of the policy for political power as to how the NPP is masterminding. As enshrined in article 25(1)b of the 1992 constitution, it is obligatory of us as Ghanaians to ensure the progressiveness of the policy.

We can all see and feel the wind blowing with regards to the performance of our school children after their West African Senior High School Certificate Examination (WASSCE). Much can be said if we want to plunge into the timeliness of the government's ability to provide logistics to run the policy.

Stakeholder consultations are the way forward and what I have personally observed is that anytime this is being brought on board by H.E John Dramani Mahama on any platform at all, Dr. Mahmoud Bawumia becomes uncomfortable. This is justified by a call made by the former president at Kumasi Technical University in the Ashanti region during their annual GNUTS Congress almost a couple of weeks ago. His comments did not cause discomfort, itching, and irritation only to Dr. Mahmoud Bawumiah, but also that of Henry Nana Boakye (national youth organiser of the NPP).

Fellow Ghanaians, I wish to reiterate that the current NPP government is on an agenda to mislead Ghanaians for votes because it has been realized that, John Mahama has done enough to kick start the free senior high school policy on a good note until his exit in government.

"ALL THE NPP KNOWS IS THAT, NDC WILL CANCEL THE FREE SHS WHICH I CAN BET ON THAT, IT IS AN ABSOLUTE LIE AND ATTEMPT TO MISLEAD THE GHANAIAN PUBLIC SIMPLY FOR VOTES.