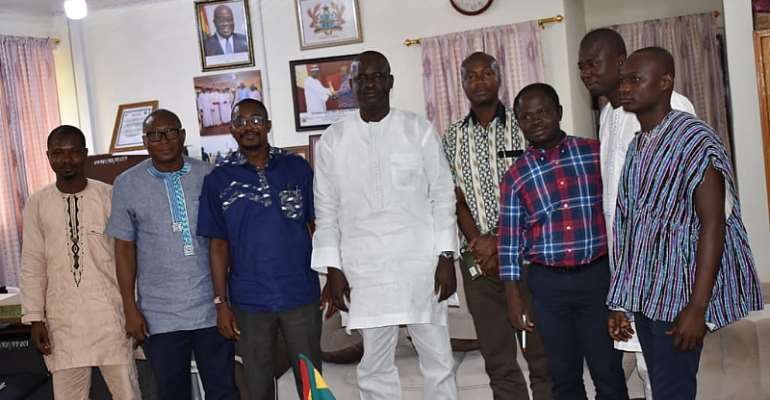 The Director of Technical Services at the Ghana Aids Commission, Dr Fred Nana Poku, has revealed that data from the 2018 National Estimates and Projections for HIV/AIDs shows five people get infected with HIV/AIDS every week in the Upper West Region.

He also added that the regional prevalence rate of 0.83 per cent which was below the national average of 1.69 but highest in the five regions of the north, put a burden on the region’s development drive.

Dr Poku revealed this when a team from the Head Office of the Ghana AIDS Commission (GAC) paid a courtesy call on the Upper West Regional Minister Dr Hafiz Bin Salih, in his office on Thursday during its working visit to the region.

He said HIV was a developmental issue hence the need to “go round the country with other stakeholders and partners to look at the implementation of interventions and identify challenges to help us modify their strategies, implementation, and policies for the betterment of Ghana”.

He commended the Upper west Regional Technical Support Unit (TSU) and the Regional Coordination Council (RCC) for their efforts and commitment towards the HIV interventions in the country and gave the assurance that the Head Office would provide the needed support for the effective execution of their activities.

Dr Poku thus urged the public to resort to the recommended Preventive measures including abstinence from sex or condom use since the government invested so much in the treatment, which could have been channeled into other development areas like the Planting for Food and Jobs and Free Senior High School programmes.

On his part, Dr Bin Salih, observed that issues of HIV/AIDS had directly correlation with development and thus ought to be given the needed attention.

He therefore gave the assurance that he would demand accountability from the focal persons at the district level to ascertain their level of commitment to their duty within their jurisdiction.

The Regional Minister also reiterated his personal commitment and the commitment of the RCC to issues of HIV/AIDS.

He was optimistic that there would be an improvement of the prevalence rate in the region, and that they would provide the needed assistant to enable the district level actors carry out their activities, including public education on HIV/AIDS effectively.

Dr Bin Salih, however called for concerted efforts from relevant stakeholders towards eradicating HIV/AIDS, saying no individual could achieve the needed results.