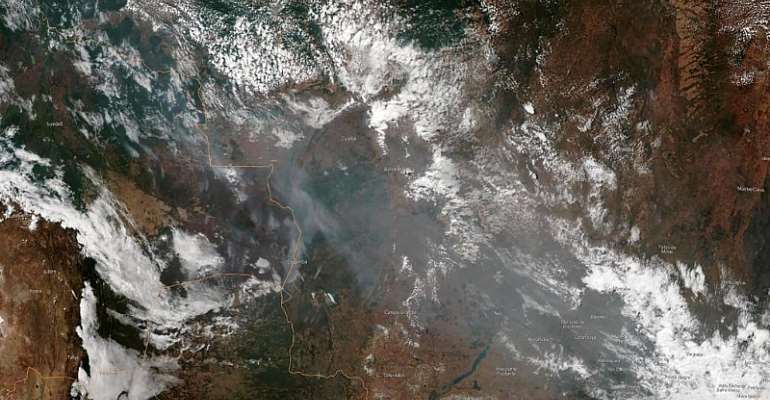 French President Emmanuel Macron called wildfires burning in the Amazon an international crisis and said leaders of the Group of 7 nations meeting this weekend in Biarritz, France, should hold discussions about them. Brazil's president Jair Bolsonaro called Macron's comment sensationalist and blamed him for having a “colonialist mentality” towards Brazil.

“Our house is burning. Literally,” Macron tweeted on Thursday. Bolsonaro responded that the French president was using a domestic issue for Brazil for personal political gain.

He said that the suggestion that the fires be discussed at the G7 “without participation by the countries in the region evokes a colonialist mentality that is out of place in the 21st century".

Bolsonaro noted that Macron's tweet included a photo of a fire in the Amazon that is at least 16 years old, and has been posted on social media in recent days in connection to the fires.

Brazil's government complained Thursday that it is being targeted in smear campaign by critics who say Bolsonaro is not doing enough to curb widespread deforestation.

Onyx Lorenzoni, the president's chief of staff, accused European countries of exaggerating environmental problems in Brazil in order to disrupt its commercial interests.

"There is deforestation in Brazil, yes, but not at the rate and level that they say," said Lorenzoni, according to the Brazilian news website globo.com.

His allegation came after Germany and Norway, citing Brazil's apparent lack of commitment to fighting deforestation, decided to withhold more than $60 million in funds earmarked for sustainability projects in Brazilian forests.

Official figures show nearly 73,000 recorded forest fires in Brazil in the first eight months of 2019, the highest number for any year since 2013.

Bolsonaro attributes the fires to increased drought, and has accused environmental groups and NGOs of whipping up an "environmental psychosis" to harm Brazil's economic interests.

Peru, which contains much of the Amazon basin, said it was "on alert" for wildfires spreading from the rainforest in Brazil and Bolivia. Paraguay and Bolivia are battling separate wildfires that have devastated large areas of their rainforests.