If I Become President, I’ll Mandate Banks To List On Stock Exchange – Mahama 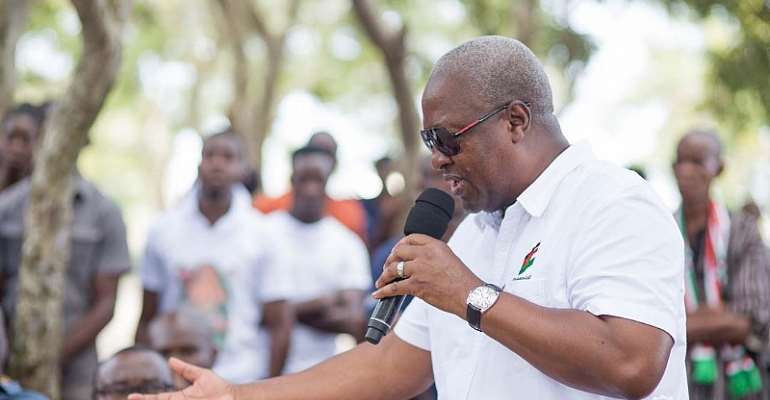 The flagbearer of the National Democratic Congress (NDC), John Dramani Mahama says he may require banks to list on the stock exchange as part of reforms to the financial sector should he become President again.

In a Q&A session on social media on Thursday, Mr. Mahama said his policy working group on Finance Economy is working on strategies “to restore the confidence of our people in the banking system.”

His remark comes on the ack of a financial clean-up executed by the Bank of Ghana that has seen the closure of 420 financial institutions within the last two years.

Aside from a possible stock exchange requirement, Mr. Mahama said an NDC government would consider halting the issuance of new banking licenses.

“We'll consider the freezing of new banking licenses for a period of time while encouraging as many banks as possible to list on the Ghana Stock Exchange within a reasonable time frame.”

There are currently less than 10 banks on the stock exchange though observers have argued that listing will enhance transparency and better corporate governance.

As part of the BoG’s cleanup of the financial space, it revoked the licences of nine universal banks, 347 microfinance companies of which 155 had already ceased operations, 39 microcredit companies or money lenders, 15 savings and loans companies, eight finance house companies, and two non-bank financial institutions.

Most of the affected institutions were local companies which led Mr. Mahama to say his government will focus on “restoring the indigenous stake and participation in [the financial] sector.”

He said his government will “consider setting up an appropriate vehicle to regulate microfinance and allied sectors in particular.”

In addition, he said his government will not opt for collapsing banks as a first option.

An NDC government will address the receivership framework to make easier for an administrator to “reverse a decline rather than making it automatic for an insolvent bank to be liquidated.”

Mr. Mahama also called on the government to come clean on persons who stand to gain from the GHc2 billion Ghana Amalgamated Trust (GAT) meant to support five distressed banks.

“While at it, we call on the Akufo-Addo administration to lift the veil on the beneficiary shareholders of the Ghana Amalgamated Trust and to curb its supposed predatory bail out assault on the remaining banks.”

The five banks could not meet the GHc400 million capital requirement but were solvent.

But the passage of the trust was deferred by Parliament back in March 2019.