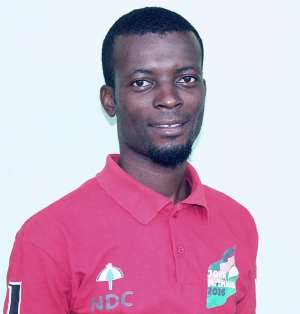 The opposition National Democratic Congress (NDC) Youth Activist in the Central Region, Cassius Otto Larbie has urged his party's delegates not to vote based on family ties or money.

He advises his party delegates who will go to the polls to elect parliamentary candidates in their respective constituencies on Saturday, 24th August 2019 to vote for candidates who are appealing, intelligent, brave, people's choice and not someone who appears the highest bidder.

Cassius Otto Larbie who urges his party's delegates is a former Director of Elections and former Branch Youth Organiser for Awutu Senya West Constituency and former Member of Central Regional NDC research committee and below is the full statement;

VOTE NOT BASED ON FAMILY TIES OR MONEY

I urge delegates not to term this exercise as their "cocoa season" before voting for aspiring Parliamentary Candidates. It should not be monetary-based.

I advise the delegates to note that the process of ousting the super incompetent and corrupt NPP government out of power starts on 25th August 2019 the day after the parliamentary primaries.

Therefore I suggest that they vote for candidates who are appealing, intelligent, brave, people's choice and not someone who appears the highest bidder. There are candidates who are popular on WhatsApp and facebook but unpopular on the grounds, as delegates, we must consider all these before we cast our vote on 24th August 2019

A lot of these mistakes were made in 2016 parliamentary primaries hence our defeat. The series of scandals alone in this govt have halved our quest to push Nana Addo and his corrupt government into the bush come 2020.

Our party leadership should do well to be as fair as possible in order not to deepen the cracks in the party.

Also we should not vote for candidates because they are our friends, family members, co-citizens, godfathers or mothers, church members, school mates but vote for candidates who can kick the NPP candidates in our respective constituencies further into the sacred forest so that NDC led by H.E John Dramani Mahama popularly known workaholic and visionary leader can lead us from victory unto victory.

As delegates, we should always look at the bigger picture, we must think about how to win the 2020 elections.

Above all, NDC is devoid of confusions and fights hence we should not do things to create tension at election grounds since that is not our style