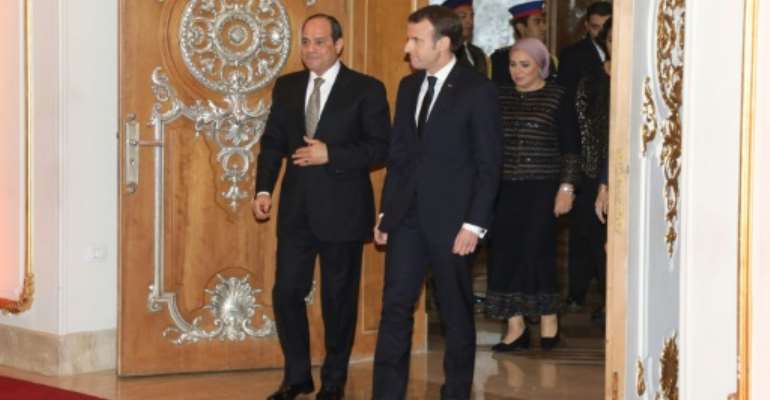 Macron visited Egypt in January, pressing Sisi on his rights record and urging him to respect freedoms. By Ludovic MARIN (AFP/File)

Sisi is slated to attend the international meeting where Macron will host world leaders in the city of Biarritz August 24-26.

"Public space has been virtually closed down in Egypt in the midst of a worsening human rights crisis, with a severe rollback of the freedoms of expression, assembly, association and the press," the group of 20 human rights organisations said in a statement.

Sisi rose to power after the military ouster of Islamist president Mohamed Morsi in 2013.

Under his government, authorities have cracked down hard on Islamists, secular and leftist activists as well as journalists and bloggers.

The space for civil society groups to operate freely has also been severely restricted.

The 20 groups want Macron to call on Sisi to "drop all charges and unconditionally release all arbitrarily-detained human rights defenders and journalists".

They also warned that failing to criticise Sisi's "abuses" at the G7 meeting will "de facto legitimise... (his) utter disregard for Egypt's human rights obligations".

In a January visit to Egypt, the French leader pressed Sisi on his chequered human rights record in a televised press conference, urging him to respect freedoms.

Sisi countered at the time that regional challenges necessitated his government's focus on the "stability and security" of the country.

Macron was roundly criticised in 2017 for saying it was not up to him to "lecture" Egypt on liberties.

France is a key exporter of arms to Egypt and other security partners in the region, particularly in Libya.