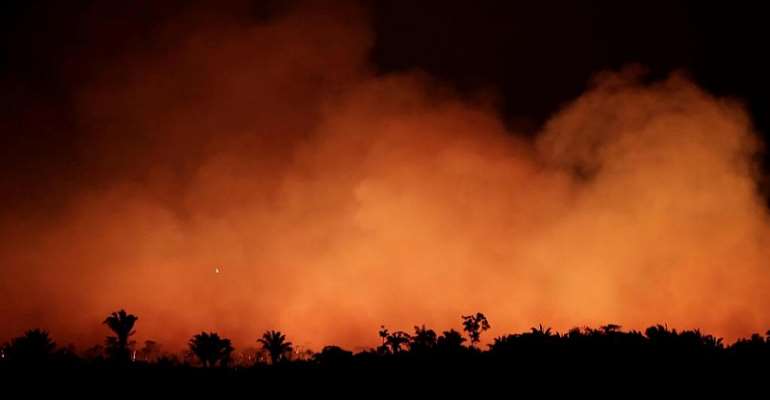 Wildfires spreading through the Amazon rainforest in Brazil's north cannot be contained because Brazil does not have the funds to fight the fires, President Jair Bolsonaro said Thursday during a Facebook live speech broadcast over the social media platform.

Bolsonaro, who had originally said that non-governmental organisations were responsible for starting the fires after he cut their funding, claimed on Thursday that he was only voicing his suspicions.

Satellite images confirm that large swathes of the Amazon, home to large number of indigenous people, are burning. Brazil's space research agency, INPE said that imaging shows that wildfires are up some 83 percent.

INPE says some 72,842 fires have been registered, the highest amount since they began keeping records of fires in 2013.

"All you can see is smoke," Thiago Parintintin, who lives in an indigenous reserve just off the Trans-Amazonian highway, told Reuters newswire.

"It didn't use to be like this," he added.
Parintintin says increasing agriculture development of the Amazon, which brings deforestation, is partly to blame.

Others say farmers light the dense vegetation to clear land for cattle grazing.

Indigenous people are the key to protecting the Amazon

“Now that the world is finally paying attention, it's important to also understand that governments and companies around the world are emboldening Bolsonaro's toxic policies when they enter trade agreements with his government or invest in agribusiness companies operating in the Amazon,” said Moira Birss, Amazon Watch's campaign finance director.

Amazon Watch has called on those who are upset by the destruction to do something about it.

“Support the courageous resistance of the indigenous peoples of the Amazon,” it says on twitter.

And “make clear to the agribusiness and financiers involved in the destruction that we won't buy their products,” it added.

JHS Not Increased To Four Years Or Reduced SHS Duration – Na...
47 minutes ago

We've Been Begging To Survive Over Closure Of Our Shops – N...
47 minutes ago