His Majesty Met His Excellency – Joy, Excitement, Hopes And Development 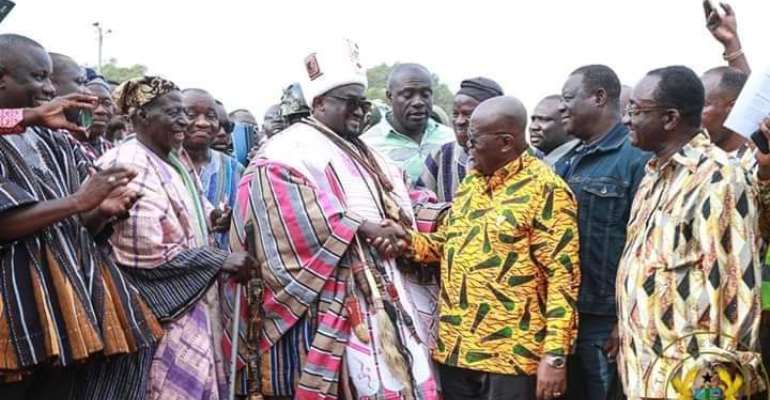 As part of his tour of the northern part of the country, His Excellency, President Akufo-Addo paid a development – rich visit to the great Kingdom of Nanung. This was the first time the president visited the Kingdom after taking the sword of power.

The meeting was one of hope, joy and excitement as the entire Kingdom came together to welcome the first Gentleman. As the president entered the Kingdom with vibrant promises that will see the kingdom catching up with its peers, the overlord and acting president of the Nanung Traditional Council welcomed him with very positive development proposals.

The revered regent started his speech by thanking the president for not forgetting the Kingdom in his provision of several development projects throughout the country. “Your government’s commitment to our fair share of the national cake is not debatable.” The Overlord said! His Royal highness singled out the president’s flagship program of Planting for food and jobs as one of the great areas the kingdom cannot talk without a mention.

“Your Excellency, as a traditional area noted for its massive reliance on agriculture for livelihood for its people, your nicely thought out planting for food and jobs program has brought relief to our farmers; clearing the burden of huge investments in procurement of seeds and fertilizers. This program has improved conditions of our people and is ensuring food security in our part of the country.” The overlord said.

His Royal Highness called on the president to help the Kingdom attain peace and security, and “come out” of the current curfew that forces the Kingdom to sleep and impedes several development and socio – cultural activities.

The Lion stated without ambiguity that Nanung should have been out of the current situation if people were bold enough to help implement the Supreme Court ruling that did not deviate from the rulings of all traditional and lower level courts. He mentioned that conflict of interest among some of the president’s representatives presiding over the affairs of the peace process is impeding the progress to peace, and called on his excellency to take steps to change this.

“Your Excellency, you are a true democrat and respect the rule of law; once upon a time you saved lives and saved the whole nation by accepting a Supreme Court verdict. You demonstrated that you are a true son of the land and a seasoned lawyer. The irony is that, under your watch the Supreme Court verdict on the Bimbilla Skin is disrespected; and there is too much conflict of interest in bodies supposed to enforce the law. The family of the late King (Naa Andani Dasana Abdullai II) awaits justice whiles suspects move freely in town are all cause to worry. The issue of chieftaincy awaits discipline from law enforcers to enforce the Supreme Court verdict.” The Overlord stated!

The Overlord thanked his Excellency for providing several CHIPS compounds throughout his kingdom. He however pleaded to the president to upgrade the Bimbila hospital and Wulensi Health Center to Trauma Center and district Hospital respectively.

The call of the Overlord was necessitated by the fact that accidents have increased on the Eastern Corridor road; and the population ballooned as people troupe to Bimbila to enjoy the development projects executed by the president.

The overlord gave the president assurance of the Kingdom’s support for the project to succeed. He mentioned that “100,000 acres of land are ready and available to government for agricultural purposes to enhance food security and increase jobs for the benefit of the Kingdom and the country.”

Additionally, the Overlord thanked the president for providing the various assemblies within the kingdom farm equipment to promote agricultural mechanization. He however questioned why the Nanung Kingdom was left out when the Vice President through the Regional Minister distributed tractors to all the traditional overlords in Northern Ghana. He questioned whether Nanung was forgotten or not considered a Kingdom in that case.

His Majesty Naa Dasana also touched on the free senior high school policy introduced by the president to provide education for all – without regard for economic status of beneficiaries.

“Your Excellency, statistics from GES shows a massive increase in enrolment in all the senior high schools. The FSHS policy has reduced the burden on parents and guardians towards their wards’ access to secondary education. The initiation of such pro poor policies will continue to touch the lives of many of our people.” The Overlord said.

Finally, the Overlord thanked the president for elevating his Kingdom to the status of a Municipality and called out the recognition given to the Kingdom by giving strategic positions to sons and daughters of the Kingdom. “I wish to also use this opportunity to thank His Excellency for recognizing that we have developed as a local authority. Our elevation from a District to a Municipality under your stewardship is praiseworthy and whilst we are grateful to you for the elevation to a municipality, I wish to request for the creation a new District from our municipality in close consultation with the Traditional Council. “ He said.

“Your Excellency, I have longed craved for the opportunity to express our appreciation for the kind of representation you have offered our people. The Nanung Traditional council can boast of having its sons in strategic positions in government. We take great pride in what you have done for us and so shall we keep you close to our hearts.” The Lion continued!

The visit of the president was a true blessing to the Kingdom as he helped cut sod for the construction the long awaited Bimbila – Salaga road. This road, when completed, will see exponential growth in economic activities in Bimbila. The president also delivered several farm equipment to the people of the Kingdom through the district assemblies to see to the success of the much-appreciated planting for food and jobs program.

Undeniably, the day was a one of the best days for the kingdom in a very long time. 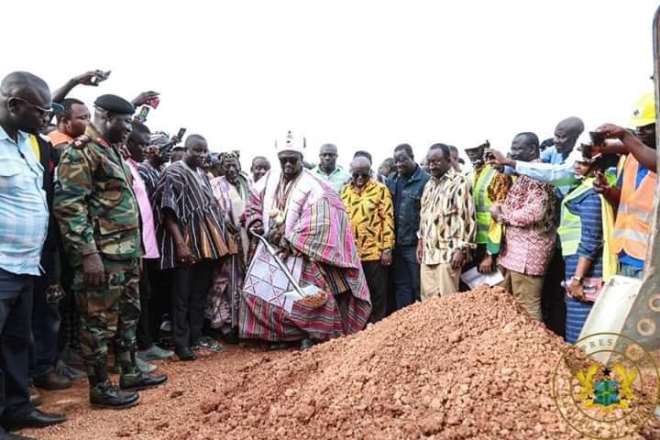 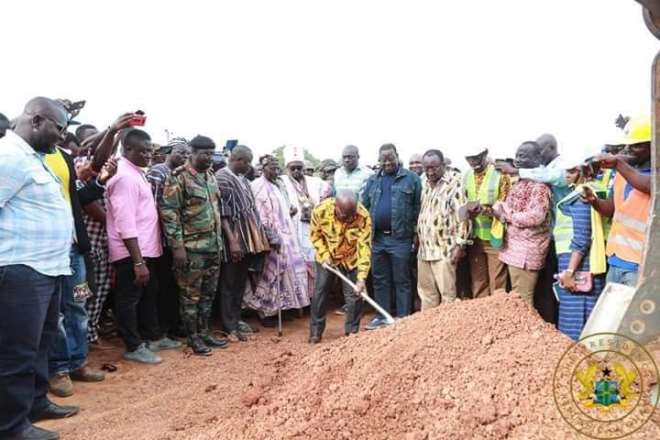