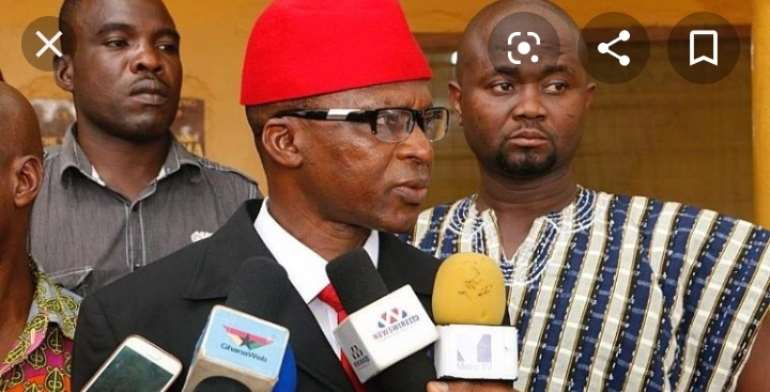 As part of the vision of the ruling New Patriotic Party (NPP) to better the lives of persons with disabilities in the country, the Municipal Chief Executive (MCE) of the Ayawaso North Municipal Assembly (ANWA), Aminu Mohammed Zakari has challenged all beneficiaries of the District Assembly's Common Fund to make good use of the funds provided them.

He said instead of handing the physical cash to the beneficiaries, the funds are converted into start-ups to enable persons with disability engage in trade or business that will sustain them.

According to him, the funds disbursed forms part of Government’s 3percent allocated to persons with disabilities.

Speaking at an event, the MCE said "It has always been the dream of President Akufo-Addo to build an all inclusive society where its laws support the positive discrimination. As the 30percent is being disbursed today in start-up forms, I am challenging you to make something better of this for a bigger and brighter tomorrow."

The MCE reiterated that previously, there used to be challenges in the sharing of the monies allocated for persons with disabilities in the district adding that this necessitated the need to convert the cash into logistics form.

He said "previously, the District Assemblies Common Fund allocated for people with Disabilities was 2percent but Nana Addo saw the need to increase it to 3percent. There used to be lots of challenges in the disbursement of the monies. Some people end up claiming they received nothing whiles they have. We therefore agreed to the idea of converting the cash to business idea for the people."

Hon. Amidu continued," Some people were found of using their monies to buy goat or cow meat with fufu previously. That will not happen again. Instead of giving you physical cash, if you choose to sell fruits, you will be set up in the business so you can make profits, save some for future use. You can use the excess to do other things."

He further revealed that the Assembly will deploy its staff to monitor the progress of the start-up businesses in the Municipality.

"My staffs will be tasked to report to the Assembly on progress of work. Anyone fond of misusing the revenue generated from start-up business will have his or her name deleted from the data making it difficult for such individual(s) to seek further help," he cautioned.

The Municipal Coordinating Director of Ayawaso North Municipal Assembly, Madam Eugenia Agbenyagah in her welcome addressed pleaded with the beneficiaries to be content with what has been given them adding that it is not also a criminal act but a disgrace to hop from one Assembly to other claiming more items which at the end will deprive others from benefitting.

Programs Officer at the National Council on Persons with Disabilities (NCPD), Amanorbea Dodoo said "We are setting you up so you can start businesses and be independent. We urge you to be keen on sustaining your businesses.

A beneficiary, Mr. Johnson Mahama lauded the Nana Addo led government and Municipal Assembly for the kind gesture and challenged them to make a priority of monitoring the day to day activity of the businesses set up.

The Akufo-Addo administration introduced a policy of awarding 30 percent out of the 70 percent government contracts for local companies to persons with disability and women. Vice President Dr Mahamudu Bawumia, who made this known revealed that when it comes to issues of persons with disability, a certain amount of positive discrimination is allowed.