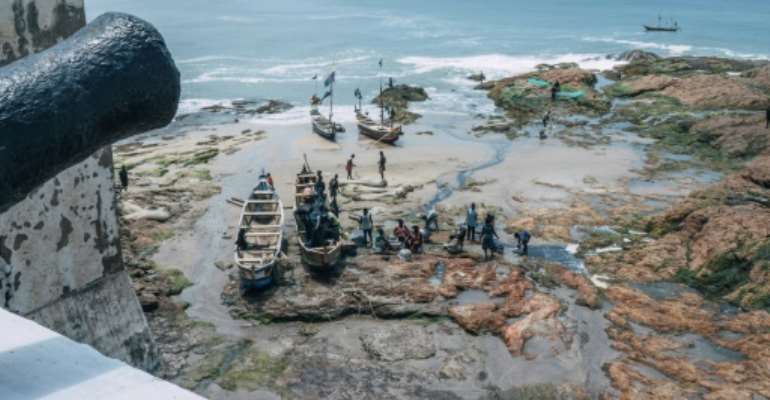 African-Americans are flocking to Ghana as it marks the "Year of Return" and the 400th anniversary of the first slave ship landing in Virginia. By NATALIJA GORMALOVA (AFP)

US preacher Roxanne Caleb blinked away the tears as she emerged from a pitch-dark dungeon where African slaves were once held before being shipped across the Atlantic to America.

"I wasn't prepared for this. I'm heartbroken," she told AFP as she toured the Cape Coast slave fort on Ghana's ocean shore.

"My mind still can't wrap around the fact that a human being can treat another worse than a rat."

Caleb is among the African-American visitors flocking to Ghana as it marks the "Year of Return" to remember the 400th anniversary of the first slave ship landing in Virginia.

The West African nation is banking on the commemorations to give a major boost to the number of tourist arrivals as it encourages the descendants of slaves to "come home".

Cape Coast Castle, 150 kilometres (90 miles) from the capital Accra, is a major magnet for those visiting

The white-washed fort lined with cannons was one of dozens of prisons studding the Atlantic coast where slaves were held before their journey to the New World. 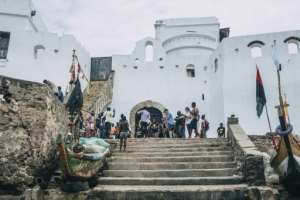 A string of prominent African-Americans have headed to the site this year to mark the anniversary since the first slave landing in 1619.

Among them was a delegation of Congressional Black Caucus led by House Speaker Nancy Pelosi that toured last month.

For those visiting it is an emotional rite of passage.

"This has been understanding my history and my roots where I came from," Caleb said.

"I am very thankful I came here as part of the Year of Return."

Sampson Nii Addy, a corrections officer with the Montgomery police department in Alabama, said he and his family had found the tour an "education".

"I think every black person needs to come around to learn history; how people were treated," the 52-year-old told AFP.

"We can't forget history but we can always learn something from it."

Ghana, one of the continent's most stable democracies, has long pitched itself as a destination for African-Americans to explore their heritage and even settle permanently. 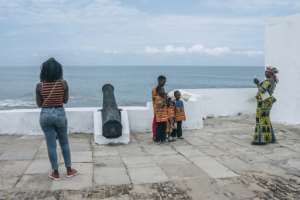 In 2009 President Barack Obama visited with his family and paid homage at the Cape Coast Castle.

Kojo Keelson has spent nine years guiding tour groups around the Cape Coast Castle and says 2019 has seen a surge in interest as Ghana looks to rake in tourism revenue of $925 million (830 million euros).

"It's like a pilgrimage. This year we've a lot more African-Americans coming through than the previous year," he told AFP.

"I'm urging all of them to come home and experience and reconnect to the motherland."

Akwasi Awua Ababio, the official coordinating "Year of Return" events, pointed to high hotel occupancy rates as he said "enthusiasm is very high and we've got huge numbers coming from the US and Caribbean".

He insisted that beyond the major economic boost, Ghana was also looking to use the new connections it is forging to convince the descendants of slaves to resettle for good and help the country develop.

"Human resource is always an asset and we need to see how we can welcome them home to utilise their expertise and networks," the director for diaspora affairs at the presidency said. 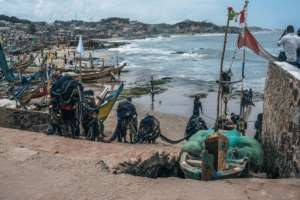 The African American Association of Ghana brings together those who have moved to West Africa and offers help to integrate them into their new surroundings.

President Gail Nikoi praised the "Year of Return" initiative by Ghanaian leader Nana Akufo-Addo and said the country was "setting the stage for future engagements and involvement of African-Americans and other Africans from the diaspora in the development of this country."

But she said the authorities could still be doing more to help attract arrivals and convince them to stay.

"Dialogue and engagement is the first step," she said.

While most of those visiting Cape Coast were not thinking about settling back permanently -- they said the trip had opened their eyes to both their own history and what Ghana has to offer.

"It has broadened my horizons about how we came to be here and what our ancestors went through," said William Shaw, 57, from Montgomery.

"I would love to come again. There is a lot more to see here in Ghana... at least once in a year I'd advise African-Americans to come back to their native land and learn about their history."