In a landmark ruling, a Johannesburg court on Wednesday barred the unjustified display of South Africa's apartheid-era national flag, saying such gestures amounted to "hate speech" and "harassment".

Judge Phineas Mojapelo said in Johannesburg that any gratuitous display of the old flag was "racist and discriminatory".

"It demonstrates a clear intention to be hurtful, to be harmful and incite harm and it in fact promotes and propagates hatred against black people... it constitutes hate speech".

The ruling followed a petition to the court by the Nelson Mandela Foundation Trust after the flag was displayed in October 2017 by white South Africans protesting at the murders of white farmers.

The judge said those who publicly displayed the flag "wish to remind black people of the oppression, humiliation, indignity, demonisation that they moved away from and do not wish to relive." 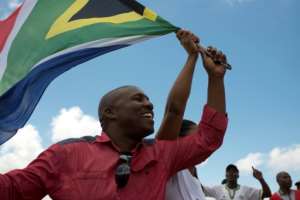 The former flag was used from 1928 until 1994 by the Union of South Africa, then a British dominion, and by the Republic of South Africa that succeeded it.

It comprised three stripes of orange, white and blue with three small flags at its centre -- the emblems of the Orange Free State, Britain and the South African Republic.

Intertwined with the white-minority regime, it was widely known as the "apartheid flag" before being dumped in 1994 with the advent of democracy and its replacement by a multicolour flag.

Mojapelo, a high court judge presiding over what is called an equality court, said the prohibition was not a blanket ban.

The flag could be displayed for academic or artistic purposes in the public interest, he said.

Racial tensions remain high in South Africa, a nation gripped by wide economic disparities and facing a tough battle to ease unemployment and roll back crime.