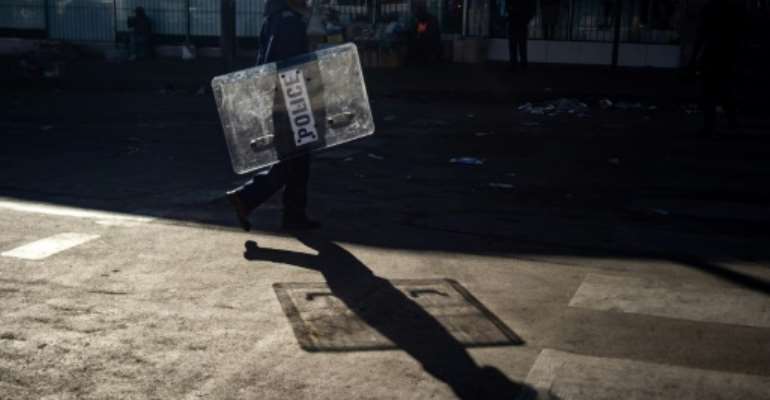 Police officers looks on as he patrols near Tredgold Magistrates courts on August 19, 2019, in Bulawayo, Zimbabwe. By Zinyange Auntony (AFP/File)

Zimbabwean police outlawed anti-government protests that had been scheduled to take place on Tuesday in Gweru, the country's third largest city, the main opposition MDC said.

The march, organised by the Movement for Democratic Change (MDC), is the third demonstration to be banned in less than a week.

In a statement the MDC described the move as not just "a ban on civilian politics, but a de-facto state of emergency".

"The prohibition orders that are being used to stifle and throttle democratic space are in themselves unconstitutional," it said.

MDC Vice President Tendai Biti said in a tweet that "the regime's actions are effectively banning the MDC & suspending the constitution."

But, he promised, "we will soldier on peacefully & Constitutionally."

Police have already banned marches in the capital Harare and Bulawayo, the country's second largest city.

The protests aim at highlighting the worsening economic conditions in the southern African country.

Riot police patrolled the streets of Gweru on Tuesday where some shops kept their shutters down, according to witnesses.

The European Union, Australia, Canada and the United States have called on the authorities to exercise restraint and proportionality.

The "intimidation, harassment and physical attacks on human rights defenders, trade union and civil society representatives, and opposition politicians -- prior to, during and following the demonstration in Harare on 16 August -- are cause for great concern," their envoys said in a rare joint statement issued in Harare.

Zimbabwe's government is trying to mend relations with the West after decades of isolation over human rights abuses under Robert Mugabe who was ousted in a military-led coup in 2017.

But many Zimbabweans say things have gone from bad to worse with shortages of bread, fuel, medicines. Inflation is now running at triple figures.

According to the UN, about five million Zimbabweans, or a third of the population, are in need of food aid.