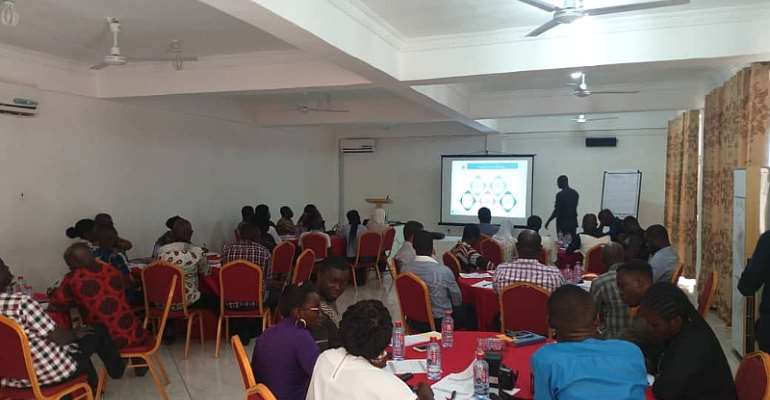 Media practitioners selected from diverse media background, representing five regions in the country, have been trained by UNICEF on ethical reporting and child online safety.

The workshop, which was organized in Ho in the Volta Region on Tuesday 20th August 2019, attracted over forty (40) participants.

Opening the workshop, the Communications Officer of UNICEF, Evelyn Baddoo, explained that capacity building was purely the motivation behind the organization of the training program.

She underscored various activities currently promoting child abuse in Ghana and urged media practitioners to work with relevant partners, organizations to stem the tide as Ghana joins the rest of the world to fight all forms of child abuse.

She said UNICEF in collaboration with Ministry of Communications (MOC), Department of Children (DOC), organizers of the training program, will continue to urge journalists in the country especially beneficiaries of the workshop to report ethically in line of their duties as media practitioners.

The beneficiary media practitioners were also urged to publish and broadcast research findings on risks and opportunities related to child online practices.

One of the main speakers, Michael Abiaw, from Department of Children under the Ministry of Gender, Children and Social Protection, entreated participants to constantly investigate, research on laws and conventions protecting the rights of children in the country and apply them in their writing.

He said the country has enacted various laws, and signed onto international protocols and conventions to back the rights of children in Ghana following an observation made that violence against children in the country was real and rampant.

Aside that, he said government has also established departments and agencies to protect the rights of children as part of measures employed to make Ghanaian children comfortable.

He, however, revealed that violence against children predominantly occurs at home than in any other setting.

Aside that, he mentioned institutions, online platforms, community, workplace, schools among others.

Michael Abiaw, said the visible forms of child abuse often recorded in the country include physical in the form of beating, hitting victims with items.

He said sexual exploitation on the other hand, include defilement, rape, while psychological abuse include black mail, with economic exploitation had to do with child labour, and trafficking.

He said all these activities mentioned above turn to affect the child, hurts or put impediments on the way of the child and therefore must be avoided.

"It shouldn't interfere in the development of the child", he cautioned.

So-ciocultural activities, laws permitting reasonable force, insufficient allocation of resources to government institutions, advocacy institutions, personal experience and poverty, he observed, were also among the causal agents of child abuse in the country.

The theme for the workshop was "Ethics reporting and child online safety: Role of Journalists".

At the end of the workshop, UNICEF envisaged that participants will influence the Ghanaian society with the desired outcome of sharing information on CSEA and how to report ethically in the media.

Again, they expected participants to circulate the findings from a research done on risks and opportunities related to child online practices.

The Volta Regional Chairman of Ghana Journalists Association (GJA), Anthony Bells Kafui Kanyi in his welcome address reminded journalists that in the past, it was child labour and trafficking that made headlines in Volta Region because it served as receiver and supplier.

He said the Region was therefore ready and willing to join the current campaign to protect vulnerable Ghanaian children.

He drew the attention of UNICEF to cases of child abuse in Volta Region, including child prostitutes gallivanting in popular pubs in Ho, capital of Volta Region.

According to the GJA Regional Chairman, commercial sex work has become very attractive and currently hosting many teenagers in the region which must be tackled frontally.

"Our families are no longer serving as defense for our children", he lamented.

He on the lighter note encouraged participants to enjoy fresh air from Volta Region during their stay, revealing from research findings that 29,000 Ghanaians died from air pollution due to lack of quality air been inhaled by many Ghanaian communities.

But, in Ho and other parts of Volta Region, he said people continue to enjoy access to unfettered fresh air from the mountains.