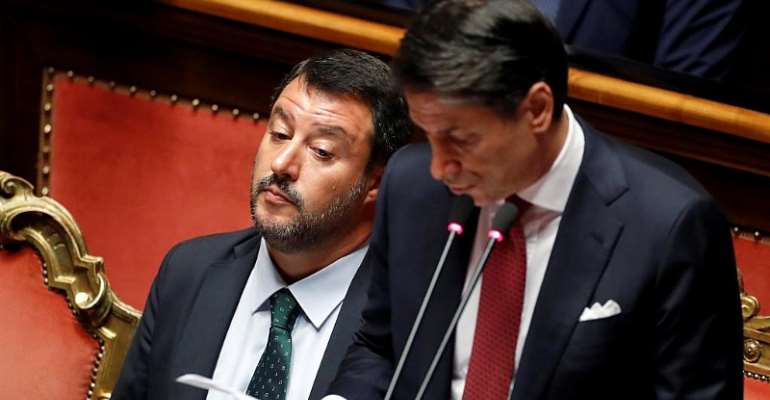 Italy's Prime Minister Giuseppe Conte has announced that he will tender his resignation to the president. In a parting blow, he lashed out at Interior Minister Matteo Salvini, accusing him of destroying the ruling coalition for personal gain.

Salvini “has shown that he is following his own interests and those of his party,” Conte told the Senate on Tuesday, after it was recalled from summer break to deal with the government crisis.

Conte said the current turmoil was brought on by the interior minister. “His decisions pose serious risks for this country,” he added.

Right-wing Salvini has been accused of calling for a new government in an effort to continue to ride high on his popularity within Italy. He had been portrayed as a strongman domestically after refusing to let migrants fleeing from Africa and elsewhere to set foot on Italian soil.

Conte said that Salvini had displayed a “serious institutional recklessness, above all showing disrespect to parliament and liable to tip the country into a spiral of political uncertainty and financial instability”.

Salvini, the head of the right-wing League party, said the other parties were afraid of fresh elections because they did not want to lose their jobs.

The interior minister said he blamed the European Union for impoverishing Italy, and that he wants to challenge its financial norms.

Luigi Di Maio, the head of the 5-Star Movement, the League's coalition partner, was called “obstructionist” by Salvini. Di Maio said he was breaking the alliance, which was less than a year old.

Conte, an independent, does not belong to either party. He will hand in his resignation later on Tuesday so that the head of state, President Sergio Mattarella, can begin discussion to try and form a new coalition.

If Mattarella is not successful, he would need to dissolve parliament and call for elections, three and a half years before they are scheduled.