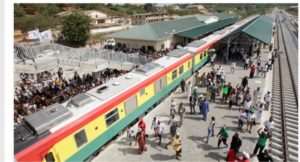 The Railway Sector Minister who is also the Member of Parliament for Essikado-Ketan constituency Joe Ghartey has challenged the Sekondi Takoradi Chamber of Commerce and Industries (STCCI) to develop an industrial park around the enclave of the railway sector.

The minister's challenge was established when the Sekondi-Takoradi Chamber of Commerce and Industry in collaboration with the Ghana Railway Development Authority held a public lecture in Takoradi during their Annual General Meeting on Monday August 19, 2019 under the theme, “RAILWAY REVITALIZATION AND SUSTAINABLE DEVELOPMENT: APPROACH AND OPPORTUNITIES.”

Joe Ghartey in his presentation stated that the railway ministry since its establishment in February 2017 has transferred an amount of One Hundred and Five Million, Forty-Eight Thousand, Six Hundred and Twelve Ghana Cedis, Forty Pesewas (105,048,612.14) from its budget allocation for the payment of project procured and executed by Ghana Railway Company Limited from 2017 to August 2019.

Addressing the dignitaries and stakeholders, Hon. Joe Ghartey hinted that the old Railway Training Institute and workshop located at Essikado has received a major facelift because it has been upgraded into modernized teaching and learning facilities to enhance capacity building and skill development for the railway sector.

He added the Two out of Seven railway location workshop was rehabilitated during the year 2018 and being modernized and equipped to become a one stop workshop to serve the Railway, Mining, Petroleum and Agricultural industries in Ghana.

The first phase of the upgrading project he said has been completed and the Ghana Railway Company Limited has started using the facility to run in-house training programmes for its staffs.

The minister in his presentation mentioned that the way forward for the railway sector in Ghana is to enhance stakeholder sensitization, title to lands, properties, reducing the activities of illegal mining on the right way and revitalization of railway system to enhance service delivery and to increase the level of monitoring.

Speaking with the Deputy Chief Executive of the STCCI, Mr. Benjamin Nii Kpandi Addy the first and second quarter business condition survey conducted by STCCI it was apparent that one key issue affecting businesses are competition in the own sector on what he termed as “copy copy.” “This is because a lot more people are engaged in the same arena of business and it is bringing a lot of challenges to businesses”, he said.

“STCCI will liaise with the chiefs and opinion leaders in the region to make sure lands are released and with togetherness, we can develop the task or challenge assigned to us,” Mr Nii Kpandi Addy said.