Berekum Thursday Market To Be Redeveloped 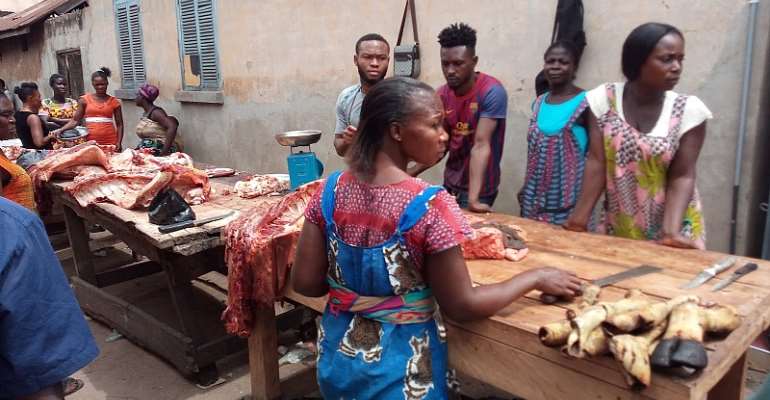 The Thursday market in Berekum in the Bono region is set to be developed into a modern market.

Briefing the Berekum Traditional Council at the Omanhene’s palace, the Municipal Chief Executive for Berekum East, Mr. Kofi Adjei said the development of the market was part of the President Akufo-Addo's initiative to develop urban Assemblies in the country to befit their status.

He disclosed that Berekum was one of the twenty-five urban Assemblies in the country selected to pilot from the one hundred million loan facility from the World Bank under the programme “Ghana Sister Cities Support Program (GSCSP)”.

According to the Municipal Chief Executive, the facility is a performance based one of which the Assembly has met all the benchmarks.

Mr. Adjei further stated that sensitization of stakeholders like the Traditional Council, market women, transport operators among others was part of the conditions attached to the facility.

Giving an overview of the project, the Berekum East Municipal Planning Officer, Mad Gladys B. Ali all staff associated with the project have been trained to ensure that the project was delivered on schedule.

She revealed that the concentration of the project was mainly in urban Berekum unlike the just ended urban grant which could be spent in other communities.

She gave exceptions to projects the fund could not be expended on including; health and educational facilities, recurrent expenditure such as vehicles, overseas travels as well as education.

The Chairman of the occasion who sat in for the Omanhene of Berekum, Osaberima Kyere Yeboah Darteh II lauded the initiative to develop the market.

He tasked the Assembly to ensure that right contractors with the relevant capacity and expertise are engaged to execute the project.

He appealed for strict supervision of the work to ensure quality project delivery.

He said most of the shoddy government works that are executed could be blamed on poor supervision of the work and expressed the hope that those in charge of supervising the project will do the right thing.

In his concluding remarks, the Municipal Chief Executive for Berekum assured the Traditional Council of the Assembly’s commitment to ensure successful execution of the project.

He therefore called on the Traditional Council to play their part in supporting the project and the development agenda of the president.

The project which is expected to commence in September 2019 includes two hundred sheds, one hundred and twenty lockable stores, a police post and fire station, health post,crèche, passenger terminal and washrooms.