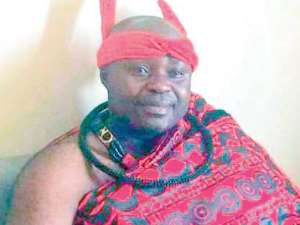 Asamponghene Oheneba Kwadwo Afoduor died mysteriously and the police, who suspect a possible murder, are seriously hunting for his killers.

The Ashanti Regional Police Command quickly apprehended four people in Kumasi on Sunday to assist in investigations into the case which has sent tongues wagging in the Ashanti Region as to how a prominent chief could be killed in that manner.

Among the arrested people included a top traditional leader in Kumasi (name withheld), who was grilled around 2 a.m. on Monday at the Police Headquarters in Kumasi.

The deceased traditional leader, who lived in Kumasi, was surprisingly found dead in his vehicle on the Ejura-Nkoranza road in the Ashanti Region on Sunday evening.

He had been stabbed multiple times at the back of his neck, his chest and other areas on his body, thereby heightening suspicion that he was murdered.

“The Ashanti Regional Police Command is investigating the murder of Nana Kwadwo Afoduor, 46, Otumfuo's Asamponghene,” a press release from the police stated.

The statement added that “the chief's body was found in his vehicle on Sunday, August 18, 2019 at about 4:30 p.m. near Ebuom on the Ejura-Nkoranza highway.”

“It is believed the late chief was murdered and his body deposited at the back seat of his Toyota Landcruiser vehicle and abandoned on the outskirts of the village.

“Police have since commenced investigations into the case and are working earnestly to get the perpetrators arrested,” the press release, issued few hours after his death, said.

ASP Godwin Ahianyo, the Ashanti Regional Police PRO, who signed the release, appealed passionately to the public to volunteer information to the police.

Meanwhile, checks made by DAILY GUIDE indicated that what was seen at the crime scene could indicate a possible contract killing.

Eyewitnesses said the deceased chief was said to have been bundled in his vehicle, which was initially believed to have been involved in a ghastly accident.

According to them, the chief's car was burning and so some church members who were passing by helped to put off the fire with an extinguisher and it was in that process that they found the chief's body and quickly alerted the police.

Eyewitness accounts indicated that the stomach area of Oheneba Kwadwo Afoduor was half burnt and there were a lot of blood stains all over the body when it was found.

The body was later on deposited at the Komfo Anokye Teaching Hospital (KATH) morgue in Kumasi by the police for autopsy.

A lot of people, including prominent traditional leaders in Kumasi, who were stunned about the shocking death of the popular chief, rushed to the morgue.

In a related development, painstaking investigations made by DAILY GUIDE, revealed that the late chief was being owed huge amount of money by his friend in Kumasi.

According to reports, it is possible the chief had tried to retrieve the money from his debtor but he (chief) was murdered and his body dumped on the outskirts of Ejura.

Sources suspected that those who killed the traditional leader had attempted to set his car ablaze in order to cover up their fiendish action.

Oheneba Kwadwo Afoduor, who is the owner of X5 Pub, a popular bar and restaurant in Kumasi, was enstooled as chief about four years ago.

Close friends said his reign had been successful because he had embarked on several developmental projects in order to help better the lives of his subjects.

I'll Be The Last Person To Derail Ghana's Peace – ACP Agordz...
46 minutes ago