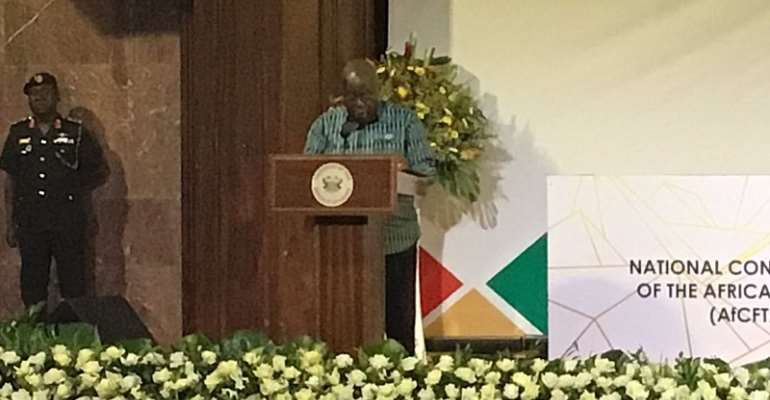 Delivering his opening remarks, Ghana's Minister for Trade, Alan Kyerematen mentioned among other things that this meeting is designed to lay focus on the collective effort of the Nation on the specific actions needed to be taken in Ghana to implement the African Continental Free Trade Area.

Again, he hopes the meeting will offer an opportunity to understand H.E Nana Addo Dankwa Akufo-Addo, President of Ghana vision for harnessing the benefits of a Single African Continental Market for the attainment of a Ghana Beyond Aid.

According to the Trade Minister, it also offers an opportunity for participants to interrogate the synergies of the AfCFTA, the AU Agenda 2063, the Ghana Beyond Aid, the Sustainable Development Goals and policies of relevant MMDAs.

Ghana was one of the first countries to sign the AfCFTA Agreement and also the first to ratify same under the leadership of H.E Nana Addo Dankwa Akufo-Addo, President of Ghana. Ghana was again the first country to offer to host the AfCFTA Secretariat, after the formal signing of the Agreement at the AU Summit in Kigali in March 2018

The AfCFTA constitutes the most significant development in Africa's integration efforts. The Agreement is expected to transform the Manufacturing and Agricultural sectors in order to accelerate inclusive economic growth and job creation, whilst fostering competitiveness across Africa.

The implementation of the Industrial Transformation Agenda is in line with the AU Action Plan to Boost Intra-African Trade (BIAT) and Accelerated Industrial Development for Africa to enable Ghana derive maximum benefits from the AfCFTA.

In this regard, the Ministry of Trade according to the Honorable Minister is in collaboration with other relevant stakeholders organizing a series of sensitization workshops and seminars to provide information on the Implementation of the AfCFTA.

The stakeholder groups to be targeted include Senior Policy Makers, Members of Parliament, the Business Community, Organized Labor, Academia, Civil Society and the Media.

The outcome of this three-day National meeting will lead to an effective implementation of the AfCFTA which is a game changer and launching pad for the Ghanaian Private Sector to explore and exploit business opportunities in Africa.

As part of seeing to the implementation, the Minster of Planning,Prof. Gyan Baffour says Government has established an Inter-Ministerial Committee to see to the smooth implementation and operationalization of the AfCFTA. Ghana’s Trade according to him is expected to increase from 12 percent GDP to 52 percent by 2022. Trade is expected to increase by some $10 Billion annually.