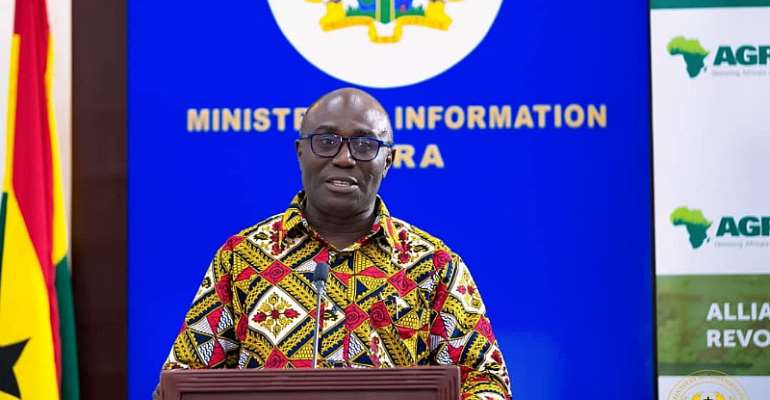 The West African Regional Director of Alliance for Green Revolution Alliance (AGRA), Foster Boateng has disclosed that Ghana will be hosting a three day African Green Revolution Forum (AGRF) 2019 which will evaluate how far the continent has progressed in the past decade and also look at ways to jumpstart what needs to be done differently in the next 5-10 years to put Africa’s agriculture on a new footing with digitalization being hailed as a key driver to the agricultural transformation.

According to him, the AGRF 2019 will particularly identify and catalyze the enabling policies, programs, and investments to leverage digital transformation to drive sustainable food systems in Africa.

Addressing the media at a press briefing, Mr. Foster Boateng said: “Given the unprecedented growth and adoption of digital technologies, Africa has an opportunity to leapfrog the agricultural transformation trajectory of the past and revolutionize life by overcoming isolation, speeding up change, creating jobs of the future and taking success to scale.”

The AGRF is considered the world’s most important and impactful forum for African agriculture, pulling together stakeholders in the agricultural landscape to take practical actions and share lessons that will move African agriculture forward. It is a unique multi-disciplinary forum where delegates discuss and commit to programs, investments, and policies that can counter the major challenges affecting the agriculture sector on the continent. Since the first AGRF was held in Ghana in 2010 under the leadership of H.E. President Mills, the Forum has annually brought together Heads of State, Ministers, business leaders, development partner leadership, thought leaders, farmer organization representatives, youth entrepreneurs, and other critical stakeholders to focus on the actions and policies needed to move the continental agenda forward.

He further added that the forum will take stock, evaluate actions, and learn from compelling evidence across the continent, presented by many of the most inspiring leaders, including young people, turning agriculture into thriving enterprises.

“Farmers will demonstrate how the use of technology and better farming methods is able to transform entire communities and nations; Ghana and other public sector thought leaders will share experiences in delivering policies and investments to advance jobs and food security; while private sector champions and agripreneurs will showcase their efforts in innovation and opening up scalable and sustainable market opportunities in Africa’s evolving food systems.” Mr. Boateng explained

Mr. Foster Boateng reiterated that the AGRF 2019 is aimed at achieving a follow up on the 2017 and 2018 commitments which seeks to showcase progress made on commitments of the last two years to advance political and economic contributions to African Agriculture while aligning what is needed to support the Malabo Declaration and the SDGs.

“There will be a Political and Policy Leadership from African Governments which will also showcase leadership of African Heads of State and 15+ ministers, particularly the progress made and the lessons learned from their agricultural transformation efforts, so that they serve as champions for the rest of the continent.” he stressed.

Mr. Boateng further mentioned that a Political and financial support from development partners and the private sector in the spirit of the campaign titled “How Will You Lead”, featuring leadership from actors across the sector that are driving current progress, and also highlighting the need for even greater leadership at all levels of the sector in order to achieve the progress needed to meet the shared aspirations for African agriculture.

He said “There will be new business deals. This marketplace of ideas (deal room) is a new addition to the AGRF and provides opportunities to negotiate ﬁnancial backing for early-stage agribusinesses to help bring African youth, high growth potential companies and public investments to the fore of sustainable agricultural development. AGRF 2019 will provide a platform for crowd sourcing ideas and ﬁnancial commitments – and to make sure these are followed through.

Mr. Foster Boateng stated that an announcement of the 2019 Africa Food Prize Winner will be made adding that the Prize will recognize an extraordinary individual whose outstanding contribution to African agriculture in recent years is forging a new era of food security and economic opportunity for all Africans.

The West African Regional Director, however, disclosed that one major challenge facing AGFA is youth not involving themselves in the project.

“One major problem is the Youth not involving themselves in the Agricultural venture. We have tried enough but all efforts is proving futile but we have not lost hope as we will continue to push for their involvement.”

Mr. Foster Boateng says he is confident that after the 3 days forum, many farmers would have learned now methods in boosting their Agricultural yields and Ghana’s economy

The Forum and its momentum have grown considerably over these years, and this is the first time AGRF has ever returned to a previous host country.