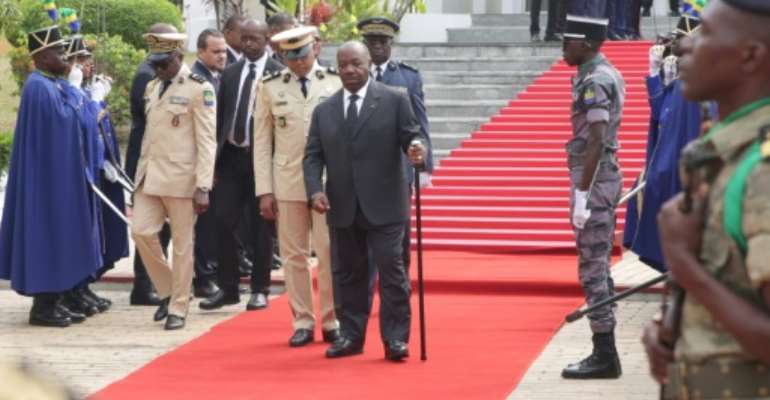 Gabon President Ali Bongo on Friday made his first public appearance outside the presidential palace since returning home in March after suffering a stroke. By STEVE JORDAN (AFP/File)

Gabon's presidency said Monday that a recent speech showed leader Ali Bongo was "firmly in control" of the country after he suffered a stroke 10 months ago that fuelled speculation about his ability to rule.

The opposition has claimed that President Bongo is unfit to lead after the stroke in October, and his every move is now scrutinised for signs of his state of health.

On Friday, the 60-year-old made his first public appearance outside the presidential palace since returning home in March after falling ill.

"The president is at the wheel, he is in command," presidency spokesman Ike Ngouoni said at a press conference in the capital Libreville.

"The president works not only to prove he is in control, everyone can notice, everyone can see that today he is on the job every day."

"Everyone could see the president has regained his oratorical fluency," Ngouoni said of Bongo's televised speech on Friday night.

However Bongo has yet to face the media since his stroke.

"When the president deems it is useful and an appropriate time, he will find the best way to address the press," said Ngouoni.

Bongo used a long cane to walk as he attended a military parade on Saturday to mark Gabon's 1960 independence from France.

Speculation about his capacity to rule the small, oil-rich central African country surged after he suffered the stroke while in Saudi Arabia.

He was flown to Morocco for treatment, returning briefly in January and then in March. During his extended absence, the army quashed a brief attempted coup.