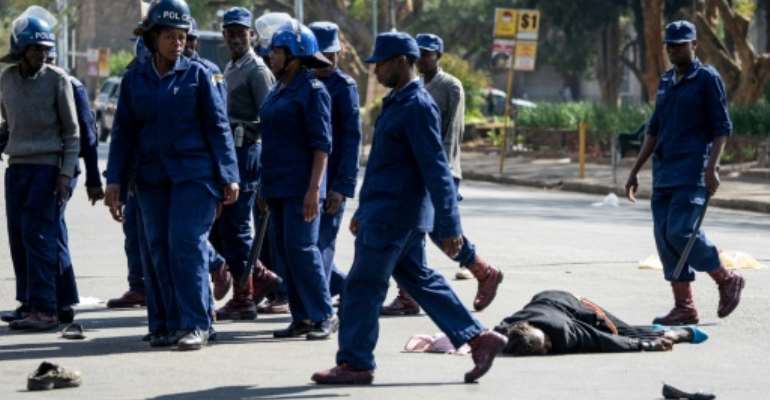 Police violently dispersed protesters in Harare who defied a ban on demonstrations on Friday.Â . By Zinyange Auntony (AFP/File)

Troops and police deployed in force in Zimbabwe's second city of Bulawayo on Monday in a bid to deter a planned opposition march, three days after brutally dispersing a banned protest in the capital Harare.

Soldiers and armed police on horseback and in trucks patrolled the central business district and most of the high density suburbs.

One of the city's usually busy areas, the precincts of Tredgold Magistrate Courts, where illegal forex changers ply their trade, was cordoned off.

Police also set up checkpoints on most roads leading to the city centre.

The authorities banned the protests, organised by the opposition Movement for Democratic Change (MDC), after police routed protesters who had defied a similar order in Harare on Friday.

"The move by the government to ban the demonstration shows they are running scared," Mbuso Fuzwayo, of the rights pressure group Ibhetshu Likazulu, told AFP as military helicopters hovered over the city, an opposition stronghold.

"They don't have confidence in themselves. This is like Rhodesia. This is primitive," he said referring to the British colonial rule era.

The MDC is challenging the ban in court, which is expected to issue a ruling at 1400 GMT.

The protesters are angry over the country's floundering economy and the jailing of a well-known government critic, tribal chief Felix Ndiweni.

The chief, who is revered in the western region of Matabeleland, was last week jailed for 18 months for allegedly destroying a villager's property.

Police fired teargas and beat up several demonstrators in Harare on Friday after they gathered in a square.

Those protests were the first since President Emmerson Mnangagwa's decision to double fuel prices sparked nationwide demonstrations in January that were crushed by police with the loss of at least 17 lives. 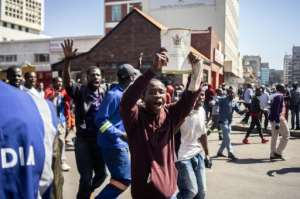 Mnangagwa took over from long-time ruler Robert Mugabe in November 2017.

He won disputed elections in July last year on a platform of change.

But many Zimbabweans say the economy has gone from bad to worse with rocketing inflation, shortages of bread, fuel, medicines and other basics.

According to the UN, about five million Zimbabweans, or a third of the population, are in need of food aid.

"We are deeply concerned by the socio-economic crisis that continues to unfold in Zimbabwe," UN Human Rights spokesman Rupert Colville said in Geneva on Friday.

"We urge the government to find ways to engage with protesters, and to refrain from the use of violence".

MDC activist Mlondolozi Ndiweni, who was geared to protest, said there was no difference between the Mugabe administration and Mnangagwa's.