Towards a new era: what is in Sudan's landmark pact 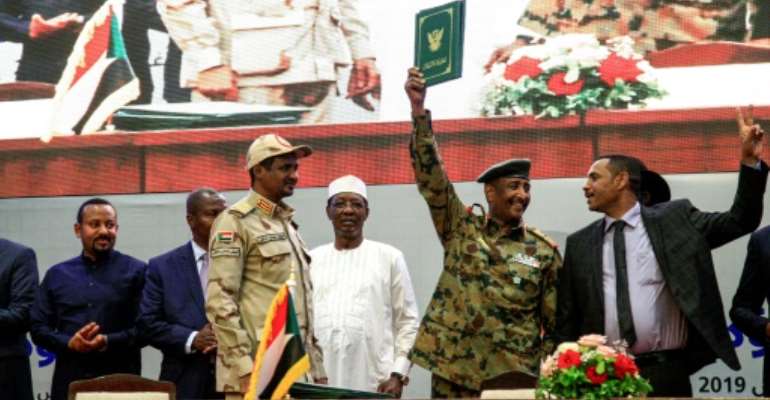 Provisionally agreed early this month and signed in full on Saturday, here are the key points of the landmark document, and how it came to pass.

The finalised declaration was signed by Mohamed Hamdan Daglo, deputy chief of the military council, and Ahmed al-Rabie, representing the Alliance for Freedom and Change umbrella protest movement.

It is the culmination of nearly eight months of street pressure, beginning with protests against president Omar al-Bashir in December last year.

While Bashir was toppled in April after 30 years at the helm, protesters remained on the streets, determined to ensure a military council that replaced the autocrat in turn hands power to a civilian administration.

Building on a framework power-sharing deal reached in July, Saturday's landmark document mandates a "sovereign council" to oversee a civilian government and a parliament.

The "sovereign council" is a joint civilian-military ruling body that will be comprised of six civilians and five military nominees.

Names of appointees to that body were due to be announced on Sunday.

While civilians hold a majority on the sovereign council, it will be headed by a general for the first 21 months.

A civilian is then meant to take charge for the last 18 months of the transition.

He is due to be confirmed by the sovereign council on August 20 -- purportedly a formality, since his selection is the prerogative of the protest movement.

Other ministers are due to be unveiled on August 28.

The cabinet shall comprise no more than 20 ministers, picked by the premier from nominees put forward by the alliance.

But this does not include the interior and defence ministers who shall be chosen by the military members of the sovereign council.

The sovereign council and the new government are meant to meet for the first time on September 1.

The legislative body should comprise no more than 300 people, 40 percent of whom should be women.

The alliance shall have 67 percent of seats and the remaining 33 percent shall be for other political parties, not linked to Bashir.

The feared paramilitary Rapid Support Forces -- headed by Daglo and widely blamed for a deadly crackdown on a weeks-long protest sit-in on June 3 -- are meant to be placed under the command of the head of the armed forces.

The newly named General Intelligence Services is to be accountable to the sovereign council.

Alleviating an economic crisis and bringing peace to conflict hit states -- Darfur, Blue Nile and South Kordofan -- will likely be key priorities for the new administration.

Under the declaration, every citizen has a right to freedom and security and no one shall be subject to arbitrary arrest.

Every person has the right to freedom of religious belief.

Every citizen has the right to freedom of expression, spreading information, and access to the press.

Internet access will also become a right, according to the declaration, provided it does not interfere with public security.

The rights to peaceful assembly and to form and/or join political parties, associations, syndicates, and professional unions are to be guaranteed.