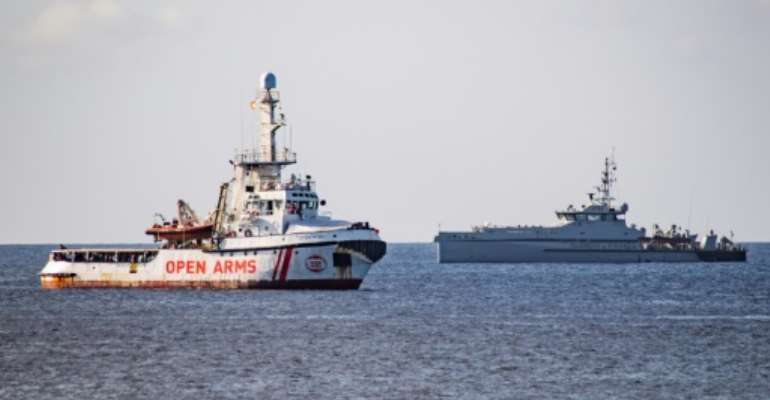 The Open Arms vessel has been anchored off Lampedusa since last week. By Alessandro SERRANO (AFP)

Spain on Sunday offered to take in the charity vessel Proactiva Open Arms with more than 100 migrants on board, slamming Italy's "inconceivable" refusal to allow it to dock.

Prime Minister Pedro Sanchez "today ordered the port of Algeciras to be ready to receive the boat Open Arms," which is currently in limbo off the Italian island of Lampedusa, his office said in a statement.

It cited the "urgent situation" on the vessel and the "inconceivable decision by the Italian authorities... to close all its ports" to the migrants.

The Open Arms standoff with Italian authorities was the latest between Rome and charity vessels rescuing migrants -- mainly sub-Saharan Africans -- making the perilous journey across the Mediterranean.

The Open Arms organisation said Madrid had taken the decision because of the "untenable" situation for the 105 migrants still aboard, including two children.

"Spanish ports are not the closest or the safest for Open Arms... but for now Spain is the only country willing to accept it," the organisation said.

Salvini, who leads the anti-immigrant League party, has taken a hardline against rescued migrants coming to Italy which he says bears an unfair burden as the first port of call.

France said on Sunday it would take 40 of the migrants on board the Open Arms as long as they meet the criteria to be treated as refugees.

"France commits to meet its promise to take 40 of the people," the interior ministry said.

EU states disagree on how to handle the migrants crossing the Mediterranean and some like Italy are taking a tougher position, turning away rescue ships as they seek to dock to drop off rescued people.

Spain's foreign ministry on Sunday called again on Italian authorities to allow the migrants entry, guaranteeing that other EU states would take them in once they reach land. 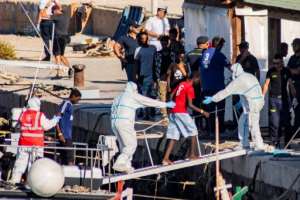 "The Italian government can be assured that when they disembark, the 107 migrants will be shared" among countries willing to take them -- France, Germany, Luxembourg, Portugal, Romania and Spain, it said.

Italy's government on Saturday reluctantly agreed to let 27 migrant children from the Open Arms disembark but it required that the rest stay aboard.

The Open Arms has been anchored since Thursday within swimming distance of Lampedusa and crew say the situation on board is critical after two weeks at sea.

Open Arms founder Oscar Camps on Sunday published a video showing four migrants jumping off the ship in a desperate bid to swim ashore before they were stopped and brought back.

The UN migrant agency (IOM) says at least 840 people have gone missing so far this year trying to cross from Libya to Europe.

Only a few civilian rescue vessels such as the Open Arms and the Ocean Viking are still operating in the Mediterranean as they say they face increasingly hostile reactions at European ports.