The Black Man: On Capitalism or Socialism 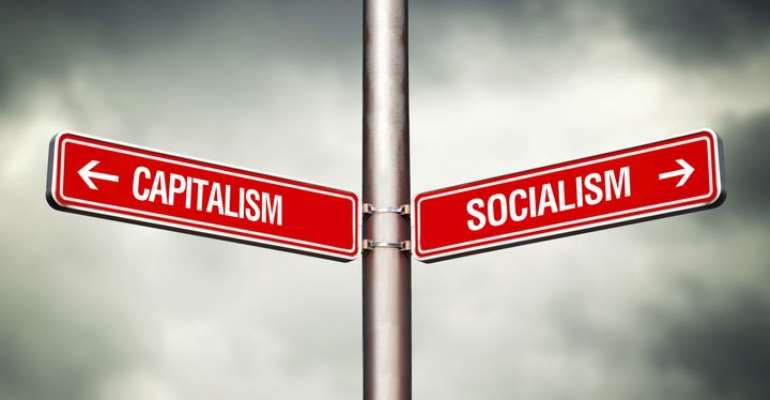 Western Education has been a blessing and a curse on the black man. Why? We have refused to use our own sense of initiative and common sense in finding creative solutions!

Western education has blinded and brainwashed the black man to the extent leaders will gladly put their trust in the white man, the same man who enslaved and exploited him for centuries, all because the net worth of most of these men are directly tied to their religion even while they watch and collaborate for the looting of their peoples natural resources. The rest of the story in poverty of black nations!

In the last half-century, the world has become more tolerant as men have learned that economic and human development of nations may have nothing to do with what religion a man believes in or what form of political ideology, Capitalism or Socialism a leadership may choose.

Pragmatic visionary leaders like Lee Kuan Yew of Singapore found that singing the songs of Socialism was no way to attract capital and put food on the table for his people. He chose partnership with American capitalists to build factories in his country and provide employment for his people. Kwame Nkrumah of Ghana chose the state resources as capital for similar pursuits. He made the mistake of thinking that everybody was equally a friend and coined the term “non-aligned” nations! Nkrumah the beloved man of Africa died in exile; today his haters and former adversaries smile and trying to change history!

The Fate of the Black Man:

History may not have been fair to the black race. In the 13th Century, according to Prof. Ernesto d’Armesto, history shows that the richest nation on earth was the old Ghana Empire of black Africans. However, there were times, not long ago, when some men, albeit Christians or Moslems, thought black men were only a little more than animals, merely worth using as beasts of burden in slavery or colonialism, or just killing! Even today some nations in the Middle East have been reported using blacks as domestic slaves.

The only key factors that seems to have changed in history, have been what and how leaders thought were their responsibilities in shaping the destiny of their people, for the people, and not for the egos of these leaders.

Most men would perhaps like to reap without sowing as the good book requires of us. Americans have a saying that there is no free lunch. Enough learning should lead to a conclusion. After fifty years of studying the West and the East, I don’t think either of the -isms will work for Ghana /Africa until we black people learn the discipline of following some rules and laws of rewards and punishments we all agree to, and hopefully these will include laws about

Without these principles well understood within our culture, capitalism or socialism will not work in Africa. They are meaningless.

It is the duty of leadership to do these above.

Where and when you have a leader either feeling it is okay to receive a $100,000 gift in the form of a car or any asset from anybody in exchange for a contract, or wield power to borrow billions of dollars in external money and use public funds to build religious or other monuments for personal fame, pleasure or self aggrandisement, neither Socialism nor Capitalism will work!! No!

The black man has to stand up and defend his rights and his nation against tyrants and ruthless leaders who have brought nothing but poverty to their people. The rise of China in the last three decades, once derided and ridiculed by the West, demonstrates the point that human and socio-economic development has nothing to do with political ideology! It has more to do with leadership vision for their nations and how they plan and manage resources and bring value and wealth in their nation to benefit the largest number of their people.

In this the 400 year anniversary of slavery, we wish our nation of Ghana and all the African nations and our people all the best. It is about time our leaders also stood up and be counted in the world.

Life is a business and it takes leaders planning and managing and leveraging human and material resources. It is time the black men