Liberia Dwindles In The Cesspool Of Misery Under Ex-Soccerstar -George M.weah 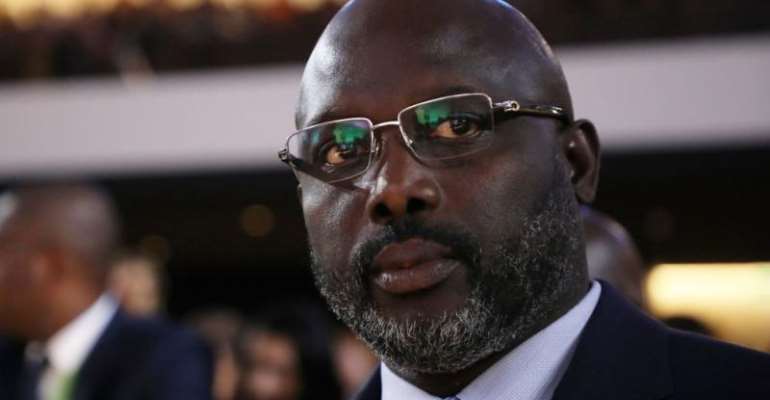 Liberia, Africa's second-oldest republic is going down into the dark epoch of history marked with the increase in household poverty, economic hardship and injustice under the ex-soccer star- George M. Weah, so rapidly as many struggles to comprehend this unexpected paralysis. In these times when the mass of the people stand to embrace quality change, there is no sign of effective policies being crafted to curtail the prevailing national enigma and miasma.

Because of these pervasive national crises, which surmount to gross incompetence and greed in the country’s leadership, both its political and economic institutions are fast diminishing on their objectives of serving the collective pursuit of progress of the ordinary people.

The citizens are suffering as a result of the skyrocketing in the prices of pertinent commodities. In another face, unemployment is on an ever racketeering increase while most of the country’s citizenry can seldomly earn the minimum benchmark of 1 dollar a day. Amidst these untold realities, taxpayers monies are being used to feed the pro-poor president with USD 500 a day. This is the irony that continues to stir the thought of resistance and defiance among the ordinary people against the pro-poor regime.

Their hatreds for the regime have evolved from the fact that the Pro-Poor regime has contravened the very pillars of its agenda which gives preference to the uplifting of the peasant masses through the incentive of jobs creation, decent and affordable health care, quality education and other sustainable social amenities. The lack of these basic social services have left the people to dwindles in the havoc of hunger and despair.

The failure on the part of the regime to transition the people from these harsh conditions but have rather taken on the attainment of wealth is a sad tale one cannot easily narrate. Today in Liberia, having a onetime meal have become a prestigious achievement in the lives of the poverty-stricken masses. We see no way yet out of these rough conditions while the affairs of the state have been run by a popular cliché of “cleaning the mess.” Sometime one would wonder what is the mess? And who are those who created this mess? Until we can answer these questions in our minds I will continue with my topic matter for now.

On the 7th of June, thousands of disenchanted Liberians from all skirts of the country converged at central Monrovia to protest and to send a clarion call to the government about the manner and form in which the country is being managed. But before this citizens mass actions; similar protests had already been held to demand a full-scale accountability in the mismanagement of public funds.

The resolved and unison of the people are fertilizing as the thought for a better leadership continues to spring in, the people have no longer chosen to remain silent in this misery, their oneness is the precipitate to dethrone these fascist rogues.

The early defiance by the people is a demonstration of how rueful and woeful they have become in such a short time. The Kleptocratic regime of the ex-soccer star which is just 18 months in span has become very alarming to the consciences of the masses.

Ex-Soccer star Weah met a budget of 18.5 million as the fiscal package for the Ministry of States and Presidential affairs 2018/2019, but out of greed he increased it to 21.5 million which I believed is a complete rhetoric and a dress provocation to the slum and shack dwellers, but yet he bragged about reducing his salary at 25% which is also a decorated myth.

Anyways, only his band of praise singer and sycophant who are limited in thought can believe such Machiavellian scam. And yet, while many people can barely eat, the pro-poor president has developed an insatiable and voracious penchant and palate for luxurious cars and building exotic mansion and private palaces at the detriment of the struggling masses who strangulate in poverty.

Why will a pro-poor president be so engaged into such exuberant lifestyles? wherein, vast majority of the population languishing in abject poverty with no proper policies being put into place to assuage the harsh economic conditions they are faced with.

Since the inception of this pro-poor president at the country highest seat, he has become ignorant of all those promises he made and the interests of the masses have been kicked into the cesspool of misery now, the masses are weeping for the redemption of their status!

The economy has become so stagnant in the way that citizens work without their incentives being able to afford them with what they want to purchase. Inflation has down-stepped real wage rate as the result, the economy only favors few and the capitalist eventually exploiting the peasants and the proletariat class of our population- who primarily voted for change in their lives.

Peaceful citizens are being witch-hunted for being too critical and vocal on the government about the prevailing tough conditions of the poor suffering masses. Rape on the increase without proper judiciary process being instituted to bring perpetrators to justice. The justice system has fallen prey to the executive that cares not because of gross incompetence on its part. Just recently, in Kingsville Margibi county district #7precisely, peaceful citizens rise in protest for justice to be dispensed into a ritualistic murder of two persons. Exasperatingly, the police opened fire at innocuous citizens, resulting in the death of one person and several severely injured.

Moreover; it has been empirically recorded and read in history that, whenever the interests of the masses become least, the basic needs of the populace become unaffordable and the rights of the people become meaningless in any state, such nations have always felt the severe resistance of the masses against the status quo and have faced the mayhem and the wrath of the disenchanted masses by anyhow. This has not been prevaricated in history.

We observed such mayhemic paroxysm in Liberia and other parts of the world. The revolution of April 12, 1980, when the people was discontented with ex-president Tolbert regime-because of his rice policy introduced at the time.

Similar uprising against the status quo happened in Cuba, wherein the peasants led by Fidel Castro and his brother Raul Castro putsched Fulgencio Batista military junta regime, which marked the Cuban Revolution of July 26, 1953, all because the people's interests were not prioritized and pushed forward.

And finally just to name few, it occurred in France July 14, 1789, which marked the French revolution, wherein the masses rose in resistance against the harsh economic conditions- such as the shortage of bread and increment in its price in the country which affected the proletariat class grossly. These are all historical facts.

.All of these are issues that irritate the exploited masses to act for change in their lives. The government failed to take heed of these historical realities about the people's interests.

All of these issues compiled in this article are issues that have led the dissatisfied masses in severe resistance against a regime that takes not their interest as paramount. This is not emphatically insinuating that the citizens should engage in insurrection but the regime needs to be cognizant of the people's interests and why they were elected by the mass poverty-stricken populace.

It is time that conscious-minded citizens of the country unite and rise against such contradictions in constructive and peaceful manner that will yield national dividends to all. There is a need that the disenchanted masses unite and speak in one voice against the prevailing harsh conditions, if not, we are going nowhere as a nation.

Eshiaka J. Kromah is an emerging writer, student advocate, and activist, studying economics at the state-run university-the University of Liberia(UL).

A militant of the Indomitable Vanguard Student Unification Party(SUP). Can be reached at Email:[email protected]