It's Time For Galamsey Operators To Smell The Pepper 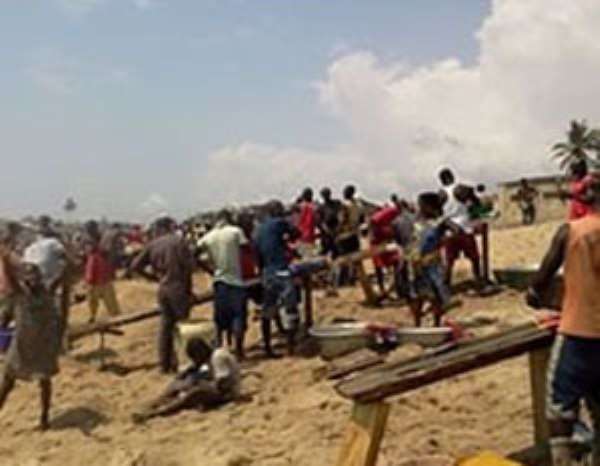 Three years ago, a scientist who teaches at the University of Cape Coast casually warned me that “Ghana’s main water bodies will almost all have been destroyed in the next five years if things go on the way they are.”

“What? Five years?” I asked sceptically.

"Our water situation will be dire” he added.

That means that we have only TWO YEARS years left before the scientist's forecast , if accurate, becomes a reality.

But three years on, are there any grounds for hoping that he could be wrong?

Not a chance. Scientific information of such a definitive nature has been available to the staff of the Ghana Water Resources Institute for years. And we can confirm the research findings ourselves -- by doing nothing more than using our own eyes to observe the current colour of such awesome Rivers as the Ankobrah, the Pra, Offin, Tanoh, Densu and Birem.

Everyone can sees how turgid the Rivers have become. The damage done to them by galamsey-associated chemicals is another story. And don't forget the effluents discharged into the water by the smoke and oil from the excavators and "changfan" machines used to dig up the riverbed and " wash" its sand and pebbles for gold.

And yet galamsey, the cause of the destruction of these water bodies, still goes on unabated,despite the accumulated, incontrovertible evidence.

Only last week, nine more Chinese people were caught doing galamsey, in spite of the huge noise that has accompanied the arrest, almost on a )WEEKLY basis, of Ghanaian galamsey operators and their Chinese collaborators.

Well, at long last, it appears the Government of Ghana may be changing its approach. Rather than trying to "manage" the horrific socio-political problem posedg by galamsey (as indicated by its expensive "GALAMSTOP" programme, there is to be

a determined attempt to suppress the crime altogether.

The Minister of Lands and Natural Resources Mr Asomah-Cheremeh was quoted on 29th July, 2019 as having disclosed that "the Government will .amend the Minerals and Mining Act to make the punishment given to people engaged in illegal mining (galamsey) more 'punitive' in order to deter others from engaging in the act."

The Minister said the new amendment would remove the discretion exercised by judges in sentencing galamsey offenders, and compel judges to impose sentences ranging from “fifteen to twenty-years imprisonment” for galamsey offences.

Offenders would additionally be fined “a minimum of 150,000 penalty units.”

The Minister added that the new law would also “explicitly criminalise" any "aiding and abetting" of illegal mining activities.

The use on water bodied of "equipment for mining" will also attract severe penalties.

This is the sort of news awaited for a long time by all sane Ghanaians, who do not want to turn over a nation without water to their offspring and the offspring of their offspring!

But I warn Mr Asomah-Cheremeh not to harbour any illusions. With an election only one year away, some of his own fellow Ministers and Members of Parliament will be desperately whispering to him to “go slow” on the proposed new laws.

They will tell him, as if he were a dolt, that the laws will "lose them votes." Of course, criminals will not vote for a party that wants to punish crime. Criminals want criminals in power, for obvious reasons.

So the Minister should be steadfast and implement

the new measures URGENTLY. He can be sure that the great majority of voterse in Ghana are law-abiding people who will laud his noble desire to safeguard the nation’s rivers, streams and water bodies for the use of our unborn generations.

Oh yes, we all know that some Ghanaians will go to any extent to fulfill their greed and seek to amass wealth. That is why we have kidnappers, armed robbers and burglars, as well as white-collar fraudsters and "ponzie" schemers in our society. So many "banks" busted! Why? Should we leave them to fleece us because their operators may command votes?

No! It is the sacred duty of the government of the day to be ruthless in stopping such nation-wreckers in their tracks.

So if Mr Asomah-Cheremeh succeeds in putting the fear of God into the people who “murder” our water bodies to satisfy the desires of their fat bellies, all God-fearing Ghanaians will hail him as one of the people who ensured the futfuture survival of our Beloved Nation Ghana.

They will also applaud the President who had the wisdom and foresight to appoint an ACTION MAN to undertake the most important task facing the nation, which, undoubtedly, is its SHEER SURVIVAL.

Meanwhile, I am sure Mr Asomah-Cheremeh has been informed that there are Ghanaians who think that even the new measures he contemplates are not stringent enough. Yes, an organisation that calls itself “Save the Nation for Future Leaders” has already sent a petition to President Akufo-Addo urging him to carry out “the summary execution“ of all those caught destroying our water bodies!

According to the organisation, such people "do not deserve to live".

Well, it has been known throughout the ages that extreme situations call for extreme remedies. Pray God that the galamsey operators see sense before it is too late.

Certainly the GALAMSTOP programme provprovides a viable alternative to galamseyers who are honest enough to see a better way of earning a living when it is offered to them.