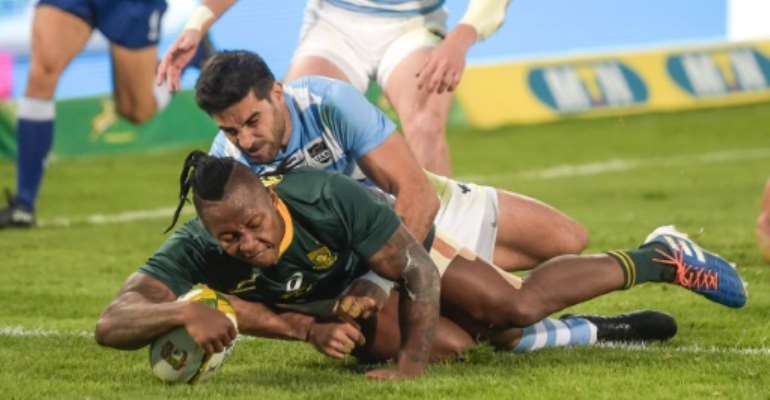 The winger struck in each half for the Springboks, who found the going much tougher than last weekend when they hammered the Pumas by 33 points in Salta to win the Rugby Championship.

South Africa have an embarrassment of riches on the right wing with Nkosi and Cheslin Kolbe, who was rested for this match, bidding to start against New Zealand in Japan on September 21 in their World Cup opener.

All the other South African points at Loftus Versfeld came from fly-half Elton Jantjies, who kicked a conversion and four penalties.

Forwards Guido Petti and skipper Pablo Matera each scored a try for Argentina. Joaquin Diaz Bonilla kicked a conversion and a penalty and Benjamin Urdapilleta a penalty.

South Africa skipper and flanker Siya Kolisi showed no ill effects from a knee injury sustained last May before coming off after 53 minutes of his first international appearance this season.

Coach Rassie Erasmus wanted Kolisi to concentrate on his personal performance so he did not restore the captaincy. Instead veteran hooker Schalk Brits became, at 38 the second oldest Springbok to lead the team.

Although Argentina suffered a ninth consecutive loss, there was encouragement for coach Mario Ledesma from a much improved scrummaging performance, that won several penalties.

The Pumas thought they had taken the lead with three minutes left when debutant Lucas Mensa touched down, but the try was disallowed for obstruction by fellow centre Jeronimo de la Fuente.

South Africa started with an entirely different team from the one that crushed Argentina 46-13 last weekend in Salta to win the Rugby Championship for the first time. Argentina made 10 changes after being humiliated at home.

Springboks flanker Marcell Coetzee was off on 17 minutes and could not return after failing a head injury assessment test.

South Africa dominated territory and possession, but had to wait 20 minutes before being rewarded when Jantjies kicked a 22-metre penalty from in front of the posts.

Argentina had their first scoring chance seven minutes later. Diaz Bonilla succeeded with a more difficult penalty kick than that of Jantjies.

A stop-start half was crying out for a try. It finally arrived on 32 minutes when slick handling allowed Nkosi to step inside one opponent before holding off two others to score.

Jantjies struck a post with his conversion attempt leaving South Africa with an 8-3 advantage that did not adequately reflect their superiority.

That lead evaporated in additional time at the end of the half when Petti intercepted a pass from scrum-half Cobus Reinach and, showing amazing pace for a lock, scored between the posts.

Bonilla converted and the Pumas led 10-8 at the break despite being on the back foot for much of the opening 40 minutes.

The highlight of the second half was the second Nkosi try on 48 minutes, which gave the Springboks a lead they never surrendered.

Seemingly hemmed in, he beat three Pumas and then dived over Sebastian Cancelliere to raise his Test try tally to seven since debuting last season.