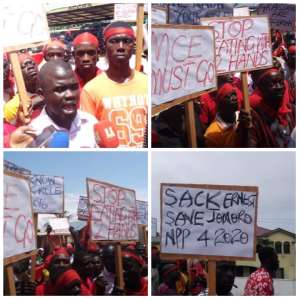 The polling station executive and electoral coordinators of the governing New Patriotic Party (NPP) in Jomoro Constituency of the Western Region have given President Akufo-Addo one-week ultimatum to sack MCE for the area, Hon. Ernest Kofie.

This was made known on Wednesday, August, 14, 2019 at Half Assini where the coordinators and polling station executive and about 3,000 sympathizers of the party took to the principal streets to demonstrate against the MCE for sinking the fortunes of the party in the region.

They were clad in red dresses and headwears; others also carried placards with various inscriptions to register their displeasure.

The 'peaceful demonstration' which lasted for about six hours started from Ekpu Basic School and ended at the party office. The leaders later gave a copy of their petition to the MCE which was received by a staff of the Assembly.

The inscription on some of the placards read; 'MCE Ernest Must Go', Mr. President act quickly', Stop eating with your two hands', 'Monkey dey work Bamboo dey chop', Sack Ernest to save Jomoro NPP for 2020', MCE, how much is a bag of cement', We can't afford to lose 2020 because of you', 'MCE you are causing the downfall of NPP in Jomoro', We want to be Messengers in power than to be Executive in opposition', among others.

The demonstrators were accompanied by over 20 policemen led by the District Police Commander, Assistant Superintendent of Police (ASP), Zuphrim Zenge, who ensured law and order throughout the procession.

Addressing the angry crowd at the forecourt of the party office after presenting the petition to the Secretary of the party, the leader of the demonstrators, Augustine Asana noted that they had observed keenly and closely that the MCE over the period of his stay in office, has shown gross disrespect towards the grassroots which was not helping the party.

He also said that the MCE has failed to meet the polling station executive and electoral coordinators of the party after several invitations written to him.

"Since he assumed office, he has not taken the pain to meet polling station executive and coordinators. He has declined our invitations for meeting on five different occasions. He has neglected the party and running a one man show which we think will jeopardize our chances of winning the 2020 Elections", he emphasized.

He claimed the MCE has turned himself into a distributor and contractor supplying cement and other materials for community projects at inflated prices.

"He has put all the sixteen (16) landing beaches community funds, that is one thousand, one hundred Ghana Cedis (GHC1,100) from each consignment into an account runned by him and has turned himself as a distributor and contractor supplying cement and other materials for the community projects at inflated prices. Example, while Ghacem cement is sold at the market price at GHC34, he sells his CIMAF cement at GHC38 to the landing beaches. This has raised serious concerns among the fisher folk and its affecting the image of the party at the coastal areas", he claimed.

The aggrieved leader continued to accuse the MCE of allocating Assembly contracts to himself and family members to the detriment of the people who financed the party activities in opposition.

"He is allocating Assembly contracts to himself and family members to the detriment of those who financially financed most of our local party activities. This, we see as unfair treatment since we may still need their support in 2020", he added.

He opined that "With regards to the recent visit of H.E the President, the party was nearly embarrassed because he refused to involve the party in planning and organisation to warmly receive our President. It took the intervention of the Constituency Chairman and MP to save the situation".

Augustine Asana who is also a Communications Team Member alleged the MCE was sponsoring some NDC Communicators at the detriment of the poorly resourced communication team of NPP.

"He sponsors some NDC Communicators to denigrate the MP daily to the detriment of our poor communications team. He has given NDC Constituency Communications Officer called Patrick Ellonu bursary and this is causing serious agitations in the NPP party", he expressed worry.

"He has not provided employment or assistance to any party member since he assumed office. He cannot boast of anything of this nature which has left party members mulling over their sacrifice in 2016", he stated.

He disclosed that "During the recent limited registration exercise, he woefully refused to visit registration centers to motivate the party agents not even those close to his office at the Assembly premises. His behaviour is demotivating the grassroots from participating in party activities".

"We have also observed that he is not collaborating with the efforts of the President and that of the Constituency Executive as well. This has left the party in the darkness. The party in Jomoro has become unattractive to us the members because he has made us realize that the party is not worth dying for", he stressed.

He accused the MCE of trying hard to make sure the sitting MP for the area, Hon. Paul Essien loses the seat in the 2020 elections.

"... there is a deliberate attempt by the MCE to ensure that we lose the parliamentary seat in the next elections. He has shown less concern about the plight of the party members", he said.

Mr. Asana noted that the posture of the MCE if not sacked from office immediately, would see the party lose the seat it won for the first time in the 2016 elections, at the next poll in 2020.

"We are of the view that the consistent posture of the MCE is yielding massive aparthy within the party which could lead to our downfall in 2020", he noted.

He, therefore seized the charged atmosphere to urge President Akufo-Addo to initiate the process of removing the MCE from office in order to save the party from sinking.

He stressed "We are by this letter sending a strong signal that, failure to change Hon. Ernest Kofie, means no party activities will be undertaken in our electoral areas. We shall ensure that we boycott all party activities and will not partake in any organisation leading to the 2020 campaign".

He, on behalf of the aggrieved group gave President Akufo-Addo and the leadership of the party one-week ultimatum to remove the MCE from office to prevent further demonstrations.

"We are giving the Executive, the President one-week ultimatum to sack the MCE. Failure to remove him will lead to series of demonstrations against the party until our voices are heard by the president", he concluded.

Receiving the petition on behalf of the party, the Constituency Secretary, Mr. Eric Muah thanked the demonstrators for embarking on a peaceful demonstration without destroying any properties belonging to the state.

He promised them to forward the petition to the leadership of the party in the Region and a copy to the President for action to be taken.

The Secretary seized the opportunity to condemn the earlier commotion which was caused by the Second Vice Chairman of the Region, Mr. Ishmael Evonla Kwame for directing some machomen to stop the demonstration.

During the process of the demonstration, one of the machomen allegedly brought into the constituency by the Regional Second Vice Chairman, pulled out a knive in an attempt to stab some of the demonstrators. This Reporter captured him on camera during the impasse.

The Constituency Secretary, therefore, accused the Second Vice Chairman as a mole in NPP and therefore urged leadership of the party at the national level to investigate the incident.