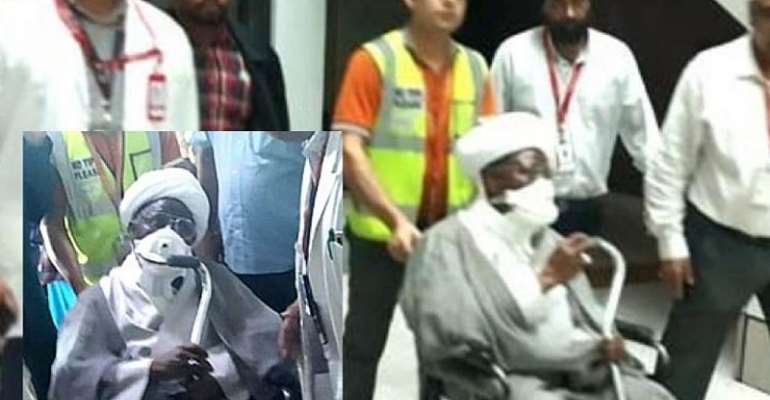 The leader of the Islamic Movement of Nigeria, Sheikh Ibraheem El-Zakzaky, has reportedly been taken back into custody on his return from India, after he complained of "prison-like" conditions at New Delhi's Madenta hospital, where he was due to undergo treatment.

“We vehemently condemn the way security agents whisked [El-Zakzaky] away upon his arrival at Abuja's Nnamdi Azikiwe international airport,” Ibrahim Musa spokesperson for the Islamic movement said in a statement.

The president of the IMN media forum explained to RFI why El-Zakzaky left India before his treatment: “What the Kano court ordered the federal government to do in India was to supervise and not to dictate what treatment the Sheikh needed.

"They refused him audience with his private doctors and when they finally met, didn't allow them have a say in his treatment," Musa added.

Abuja says sorry to India
The Nigerian government has reportedly apologised to India for the Sheikh's “unruly behaviour”, according to the Independent.

The publication says Abuja accused the IMN leader of making unreasonable demands, wanting to move into a five-star hotel and demanding the removal of police protection provided by the Indian authorities.

“Security issues took over the issue of humanitarian medical needs and he was basically denied many fundamental rights in the hospital," said Shadjareh, who flew to Delhi to facilitate El-Zakzaky's medical evacuation.

"These included the refusal by the authorities for him to be treated by the Indian medics who travelled to Nigeria in April to investigate his health."

The IHRC chief denounced "unbecoming treatment...of someone who has never been found guilty of any crime whatsoever".

Back to square one?
El-Zakzaky's daughter, Suhaila, has warned that her father could suffer organ failure at any time, in remarks that could worsen the tense situation prevailing in Nigeria over the cleric's ailing health.

An international team of medics who flew to Nigeria in April to examine the Shia leader, found that he is suffering from lead and cadmium poisoning.

This is believed to come from shrapnel left in his body after he was shot by army units in 2015, when they stormed his headquarters in Zaria to arrest him and his wife.

The raid was reportedly in response to a daring attack by the Shia leader's followers on the convoy of Nigeria's army chief General Tukur Yusuf Buratai, on 12 December 2015, during which over 300 of El-Zakzaky's followers were killed, according to a Human Rights Watch report.