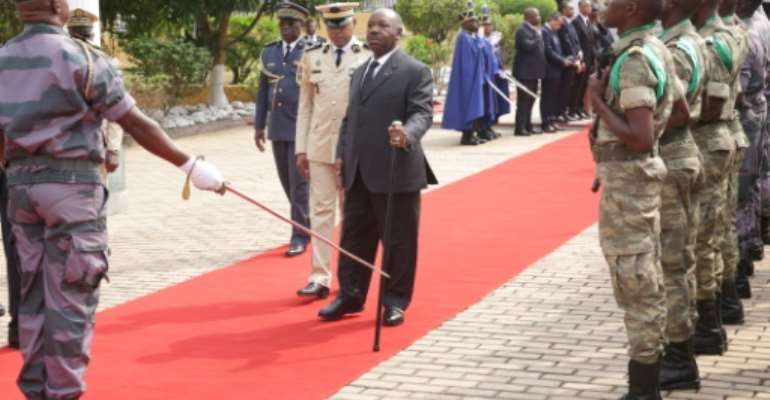 Gabon's President Ali Bongo on Saturday made a rare public appearance to attend the country's independence day celebrations, nearly ten months after suffering a stroke that fueled speculation about his ability to rule.

Bongo, whose every move is scrutinised for signs of his state of health, on Friday made his first public appearance since his illness, taking part in events on the eve of celebrations to mark Gabon's 1960 independence from France.

The public outings were the first time Gabonese have seen their leader beyond the presidential palace since he fell ill last October, except for appearances filmed and edited by Gabonese government or state media.

Standing in an army vehicle, in a dark suit and dark glasses, Bongo arrived on Saturday for the military parade on Libreville's main boulevard along the capital's seafront.

He used a long cane to walk to an observation stand, applauded by dignitaries there and he climbed the stairs by himself to his seat, next to his wife Sylvia Bongo, AFP journalists at the scene said.

Early on Saturday morning, many people had flocked to the seafront, trying to make their way through many security barriers to catch a glimpse of their leader.

"We want to see this with our own eyes," said Jean, a 38-year-old Libreville police officer, a few days before the parade. "I have not yet had the opportunity to see him, it's not normal. The political situation worries us."

Speculation about Bongo's capacity to rule the small oil-rich country surged after he suffered a stroke while in Saudi Arabia.

He was flown to Morocco for treatment, returning in January. During his extended absence, the army quashed a brief attempted coup.

Ten members of Gabon's political opposition, civil society and trade union movement have filed a suit requesting Bongo be assessed to see whether he is medically fit to continue in office.

A lower court dismissed the case in May, saying only the two houses of parliament, or the Constitutional Court acting for the government, were empowered to determine whether the president was unfit.

But the Court of Appeal has said it would hear an appeal by the plaintiffs and set a date for it -- August 26.