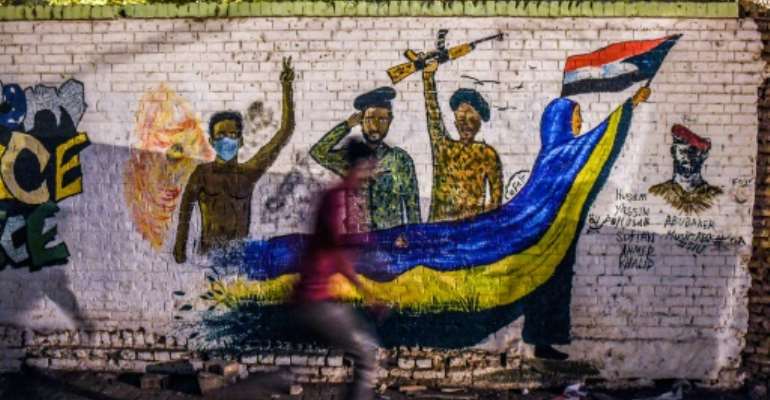 A Sudanese protester runs past a mural during a demonstration near army headquarters in the capital Khartoum back in April. By OZAN KOSE (AFP/File)

Sudan was poised Saturday to celebrate a historic deal between generals and protest leaders for a transition to civilian rule, which many hope will bring increased freedom and prosperity.

During a ceremony to be held at a hall by the Nile in the capital Khartoum, members of the Transitional Military Council and protest leaders are expected to sign the documents that will govern the 39-month transition.

"Today, the country begins its historic transition to democracy," read the front page of the Tayar newspaper, a headline echoed by most other dailies.

But the road to democracy remains fraught with obstacles, even if the mood was celebratory as foreign dignitaries as well as thousands of citizens from all over Sudan converged for the occasion.

The deal reached on August 4 -- the Constitutional Declaration -- brought an end to nearly eight months of upheaval that saw masses mobilise against president Omar al-Bashir, who was ousted in April after 30 years in power.

Timeline of main developments in Sudan's political upheaval.. By (AFP)

The agreement brokered by the African Union and Ethiopia was welcomed with relief by both sides -- protesters celebrated what they see as the victory of their "revolution", while the generals took credit for averting civil war.

Hundreds of people boarded a train from the town of Atbara -- the birthplace of the protests back in December -- on Friday night, dancing and singing on their way to the celebrations in Khartoum, videos shared on social media showed.

"Civilian rule, civilian rule," they chanted, promising to avenge the estimated 250 allegedly killed by security forces during the protests.

After Saturday's signing, Sudan kicks off a process that includes important first steps.

The composition of the civilian-majority transition ruling council is to be announced on Sunday.

He is expected to focus on attempting to stabilise Sudan's economy, which went into a tailspin when the oil-rich south seceded in 2011 and was the trigger that sparked the initial protests.

Sudanese at the main protest site outside army headquarters in late April, weeks before they were brutally dispersed by men in military fatigues. By OZAN KOSE (AFP/File)

At Khartoum's central market early Saturday, shoppers and stallholders interviewed by AFP all said they hoped a civilian government would help them put food on the table.

"Everybody is happy now," said Ali Yusef, a 19-year-old university student who works in the market to get by.

"We were under the control of the military for 30 years but today we are leaving this behind us and moving towards civilian rule," he said, sitting next to tomatoes piled directly on the ground.

"All these vegetables around are very expensive but now I'm sure they will become cheaper."

While it remains to be seen what changes the transition can bring to people's daily lives, residents old and young were eager to exercise a newfound freedom of expression.

"I'm 72 and for 30 years under Bashir, I had nothing to feel good about. Now, thanks to God, I am starting to breathe," said Ali Issa Abdel Momen, sitting in front of his modest selection of vegetables at the market.

But many Sudanese are already questioning the ability of the transitional institutions to rein in the military elite's powers during the three-year period leading to planned elections.

The country of 40 million people will be ruled by an 11-member sovereign council and a government, which will -- the deal makes clear -- be dominated by civilians.

However, the interior and defence ministers are to be chosen by military members of the council.

Observers have warned that the transitional government will have little leverage to counter any attempt by the military to roll back the uprising's achievements and seize back power.

Ousted Sudanese president Omar al-Bashir outside the Kober prison in Khartoum in June, ahead of an appearance at the prosecutor's office. By Ebrahim Hamid (AFP/File)

Saturday's official ceremony is to be attended by Ethiopian Prime Minister Abiy Ahmed and several other regional leaders.

Security forces deployed across the city for the biggest international event to be held in a long time in Sudan, which had become something of a pariah country under Bashir's rule.

One of the most immediate diplomatic consequences of the compromise reached this month could be the lifting of a suspension slapped on Sudan by the African Union in June.

Bashir, who took power in a 1989 coup and is wanted by the International Criminal Court on charges of genocide in the Darfur region, had been slated to appear in court Saturday on corruption charges.

But his trial has been postponed to an as yet undetermined date.