U/W/R: Residents Angry Over The Use Of Guinea Flag To Welcome Akufo-Addo 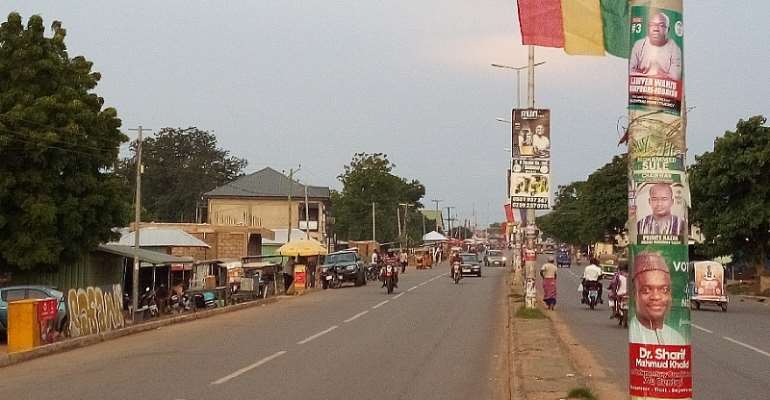 Residents of Upper West have expressed anger with designers of flags posted on street poles purported to be the Ghana flag which turns out to be the colours of Guinea.

The flags confirmed to be flags of a country identified as Guinea has left several people questioning the reason for that indecisive action displayed in the public.

They were decorated on the streets to welcome the President to the Region for his 3days tour.

The flag has been duplicated with the red, gold and green colors without the black star sign which symbolises the hope of Africa.

The flag posted alongside a political party flag can be found of the J.J Rawlings high street which is a dual carriage road in Wa municipality.

The Ghana flag is one of the major symbol of Independence and National Unity Designed by Late Miss Theodosia Okoh in 1957 after the British Colonial Rule.

President of the Republic Nana Akufo-Addo will be in Upper West on a three days tour form 17th to 20th to commission projects.

Guinea Flag
The colors of the flag has the resemblance of Démocratique Africain, the dominant movement at the time of independence. The colors were in turn derived from those of the flag of Ghana , which had first adopted them in 1957. Sékou Touré, the first

Colors
Red symbolizes the blood of the martyrs who died from slavery and wars, yellow represents the sun and the riches of the country, and green the country’s vegetation. In keeping with other flags in the region, the Pan-African movement’s colors of red, yellow, and green are used.

The design is a tricolor. The colors of the flag from left to right are the reverse of the flag of Mali. The previous flag of Rwanda, whose design was inspired by the flag of the Kingdom of Rwanda, had a large black 'R' to make it distinguishable from the near-identical flag of Guinea.