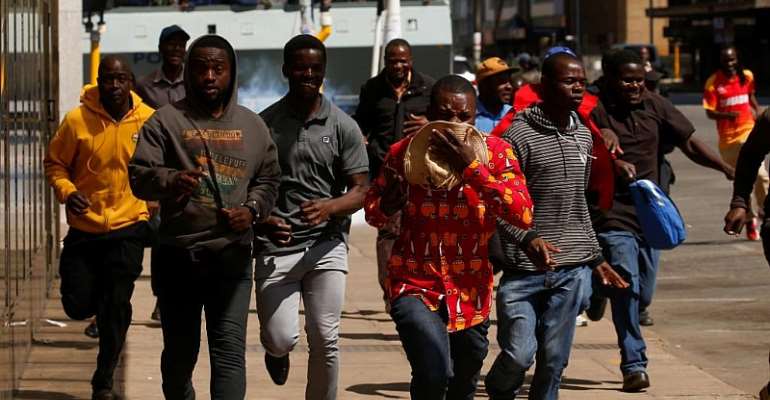 Riot police in Zimbabwe have fired teargas and beat up more than 100 opposition supporters after they defied a ban to protest against the worsening economy.

Scores of people took to the streets of the Harare capital on Friday in defiance of the ban, which was upheld by a court.

Police cordoned off central Africa Unity Square, where the demonstrators had planned to gather, warning that the demonstration would be illegal and protesters would "rot in jail."

Police also cornered a group of protesters and beat them with batons, with one woman carried into a Red Cross ambulance.

"People were just singing, people were happy, peacefully. Then they saw the police coming -- they were encircling people, they were actually surrounding the supporters then they came closer to us and started beating people," a 35-year-old protester who gave her name as Achise told AFP.

"This is worse than during colonial times," said a man who declined to be identified. "We aren't armed but the police just beat us while we were sitting on the street."

Friday's protests went ahead after opposition plans for large-scale marches were banned by the police late on Thursday.

An attempt by the Movement for Democratic Change (MDC) party to challenge the ban in court was rejected, but more than 100 MDC supporters defied the ruling before being chased by baton-wielding officers from a city square.

A police spokesman said he would give an update later.

The opposition party had planned what it said would be a peaceful protest to press President Emmerson Mnangagwa to set up a transitional authority to address economic problems and organise credible elections.

Upon taking office, Mnangagwa had vowed to revive Zimbabwe's economy, but people in the country say things have gone from bad to worse amid shortages of basic goods and skyrocketing prices.

Around five million people -- almost a third of the country's 16 million population -- are in need of aid and at least half of them are on the cusp of starvation, the World Food Programme said this month.

Friday's protests are the first since rallies in January against Mnangagwa's decision to raise fuel prices that ended in deadly clashes with troops.

At least 17 people were killed and scores wounded after the army used force, including live ammunition to end the demonstrations.

JHS Not Increased To Four Years Or Reduced SHS Duration – Na...
41 minutes ago

We've Been Begging To Survive Over Closure Of Our Shops – N...
41 minutes ago