As The Party Endorses His Disqualification
By Ato Kuntu Blankson || Sekondi 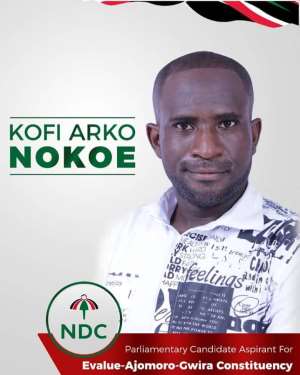 The Constituency Executives of Evalue Ajomoro Gwira Constituency wing of the opposition National Democratic Congress (NDC) has strongly refuted and rejected the candidacy and plans to pass Kofi Arkoe Nokoe’s in the upcoming vetting.

According to them, passing Kofi Arkoe will set a very bad precedent for the party in the constituency, since it would encourage others to follow the bad exemplary path by running down the party in the area and cause disaffection for its members.

The call comes in the wake of purported attempts to pass him (Kofi Arkoe) through the vetting stage with the help of some influential personalities in the region, whiles the constituency executives hold contrary and vehemently opposed to such moves.

The vetting process which was expected to have taken place on Thursday 14, August, 2019 in Sekondi, but was abruptly suspended for no reason whiles sources at the regional office, hinted of several attempt to subvert the petitions levelled against Kofi Arkoe Nokoe by some of the regional executives to sweep the matter under the carpet since they have been allegedly compromised with goodies from Kofi Arkoe and his financiers.

There have been allegations of extortions from some aspirants, especially from the Sekondi and Mpohor constituencies by some key regional executives to ensure their accomplices seal their way through the vetting.

A third in command of the party in the constituency who pleaded for anonymity opined that none of the current executives supports Kofi Arkoe Nokoe’s nomination and considers him a traitor and a bad influence to the party if given the nod to even contest in the primaries after his numerous gross damage to the party when it was in government.

“In fact, he led about four demonstrations against the NDC government between 2014-2016 which made the party unpopular and during those times, we considered him an NPP member due to his uncountable harsh and unprintable statements he made against the party and its leadership especially His Excellency the former President John Dramani Mahama.

He was on record to have called former President Mahama as a joke and a liar when he delivered the State of the Nation Address in 2015 when he told the nation that Axim town roads were rehabilitated”. He added.

“In some time back, we were invited by some key personalities who are known NPP financiers in Axim and Accra, thus Madam Dorcas Amoah, one time failed aspirant of NPP Parliamentary and MCE slots, who assured us that we supported Kofi Arkoe’s candidature of which we opposed.

We did that because our conscience did not support such moves; we knew they were doing this as a payback time due to their long-standing differences with the incumbent Member of Parliament and former Minister of Tourism, Catherine Afeku and have to hide behind him to fight against the Minister”, we were indeed disappointed and shocked to hear that from them since such moves by the NPP kingpins would go a long way to weaken the party in the future.

The member further warned that it would be disastrous and bring to disrepute the image of the party in the constituency as well as promote indiscipline and hooliganism among members, since some key followers have also threatened to do same to destroy the party in the constituency and later pick nomination to contest key positions afterwards, if Kofi Arkoe is not disqualified to set as an example for others who may have similar agenda against the party.

Kofi Arkoe over the years has widely been known as an NPP member since he actively in be in bed with the then opposition New Patriotic Party who together with the current MCE of Nzema East Municipality Mr Frank Okpenye planned, sponsored and maligned the fortunes of the NDC while in government with agitations against the leadership of the party especially the former MCE James Atta Kakara Baidoe and the Paramount Chiefs of Nzema East and wonders why he should have the effrontery to lead the party as a Member of Parliament aspirant after joining the party in 2017.

On his part, a branch party Member at Anagyie Albert Cudjoe has confirmed that he had petitioned the regional executives as well as the national executives detailing the numerous infamous acts against the party, hence his (Kofi Arkoe’s) disqualification.

We don’t want to be associated with his past deeds against the party that led the NDC to lose most of its strongholds in the constituency especially Axim and its environs as well as the parliamentary seat at large.

“This guy removed John Mahama’s billboard and left Nana Addo and Catherine Afeku’s, and when asked he told us that Mahama was corrupt and needed no honour from him (Kofi Arkoe), then President of Axim Youth Alliance and that of the people of Axim”. “Am also disappointed in Uncle George Hayford and his wife who works at the American Embassy in Accra for wasting their monies on this guy and their involvement in the politics.