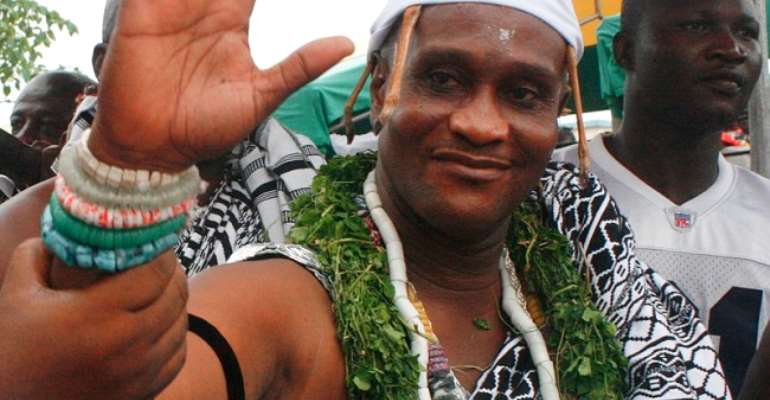 The Ga Paramountcy has denied knowing one Nii Adama Latse II as Ga Mantse after he was purportedly snubbed by some appointees of the President, Nana Addo Dankwa Akufo-Addo.

In a statement, the Paramountcy stated that Nii Adama Latse II is not the Ga Mantse of the Ga state as reported in the story published on 3news.com.

The attention of the Ga Paramount Stool Dsase has been drawn to a news item circulating on Social Media and purported to be pinned to 3news.com with a heading “Call your Men to the Oder” which seeks to put out a lot of false information from the Ga Paramountcy.

We, the Accredited Elders & Principal Members of the Ga Paramount Stool Dzase and the entire Ga State Paramountcy emphatically repeat that we have not installed anyone by name Nii Adama Latse II a.k.a Mr. George Tackie to any royal position let alone put out any information regarding that.

We emphasize the following:-

It is so unfortunate that successful and well-meaning Personalities who have done so well for themselves in their individual careers and equally fared well in their appointments by Government to serve the people of Ghana have been mentioned in that reported news item by 3news.com by no better a person than the Nii Adama Latse II, just for wanting to ascend unto the Ga Royal Paramount Stool, a place/path where none of his ancestors (bloodline) have ever tried to walk.

The Ga Paramountcy wishes to assure all that there is NO TENSION in the Ga State. The peace that has been enjoyed over the months and years will continue to reign over the Ga State through this Homowo Festival and even afterwards.

No one or group of people will be entertained should they try to cause an uproar. The Ga Paramountcy desires all peace-loving Gamei to hoot at any such group just as we hooted at hunger in the past by not participating in any of their nefarious activities which will brings any untold hardship or acrimony to our people and our unique customs and traditions this year’s Homowo celebrations.

The Ga Paramountcy wishes all Diasporans, Tourists, Visitors and Gamei the very best of the Homowo 2019. Ga, the centre of the world wishes all the best, Accra, live-in, love-it, take-a-piece with you.