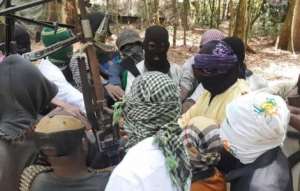 The number of violent incidents involving Islamist militants has reportedly jumped ten-fold between 2009 and 2018, and Somali jihadists from al-Shabaab appear to be the most active group.

Terror-related violence in Africa has spiked massively over the past decade, despite increasing US military presence on the continent, a recent Pentagon analysis has shown.

According to the Africa Centre for Strategic Studies, an affiliate of the US Department of Defence, there were over 3000 violent incidents reported in Africa last year, as against roughly 1,400 in 2012.

This represents a 4.2 percent spike in violence since 2017 and a generally upsetting upward trend.

“Overall, militant Islamist group activity in Africa has doubled since 2012 when there were 1,402 events linked to these groups,” the study has found.

The most worrisome regions are Somalia, the Lake Chad Basin, the Sahel (an arc-like area to the immediate south of the Sahara Desert) and Egypt.

There are now roughly 24“active militant Islamist groups” operating on the continent, up from just five in 2010, the analysis found. Today, 13 African countries face attacks from these groups – a 160 percent increase over that same time span. In fact, the number of “violent events” across the continent has jumped 960 percent, from 288 in 2009 to 3,050 in 2018, according to the Africa Center’s analysis.

Somali group al-Shabaab has accounted for nearly half of all Islamist group activity on the continent, according to the analysis, while militants in the Sahel have become more active in comparison with the likes of al Shabaab, Boko Haram, and ISIS.

Incidentally, the unrest has been growing despite the ever-increasing anti-terrorism efforts of the US Africa Command, commonly referred to as AFRICOM.

Since U.S. Africa Command began operations in 2008, the number of U.S. military personnel on the African continent has jumped 170 percent, from2,600 to 7,000. The number of military missions, activities, programs, and exercises there has risen 1,900 percent, from 172 to 3,500. Drone strikes have soared and the number of commandos deployed has increased exponentially along with the size and scope of AFRICOM’s constellation of bases.

The U.S. military has recently conducted 36 named operations and activities in Africa, more than any other region of the world, including the Greater Middle East. Troops scattered across Africa regularly advise, train, and partner with local forces; gather intelligence; conduct surveillance; and carry out airstrikes and ground raids focused on “countering violent extremists on the African continent.”

Take Somalia, for example. Over the last decade, AFRICOM has conducted hundreds of airstrikes and commando missions there and claims an enemy body count of approximately 800 terrorists, primarily members of the Al-Shabaab, a militant group. The number of U.S. air attacks has skyrocketed of late, jumping from 14 under President Barack Obama in 2016 to 47 under the Trump administration last year. Yet the Pentagon’s own analysis found that violent episodes involving the Shabab represent roughly 50 percent of all militant Islamist group activity in Africa and that this “rate has remained consistent over the past decade.”

In October 2017, members of the Islamic State in the Greater Sahara, or ISGS, ambushed American troops near the border of the Sahelian states of Mali and Niger, killing four U.S. soldiers and wounding two others. Just after the attack, AFRICOM claimed the troops were providing “advice and assistance” to local partners, but it was later revealed that American commandos operating alongside a Nigerian force had – until poor weather intervened – hoped to link up with another contingent of U.S. special operators trying to kill or capture Islamic State leader Doundoun Cheffou.

And while the observed spike in violence is associated with many factors, the recent study could be seen as calling the effectiveness of the US military into question.

“The sharp increase in terrorist incidents in Africa underscores the fact that the Pentagon’s overly militarized approach to the problem has been a dismal failure,” defense analyst William Hartung, who heads the Arms and Security Project at the Center for International Policy, told The Intercept.

“If anything, attempting to eradicate terrorism by force may be exacerbating the problem, provoking a terrorist backlash and serving as a recruiting tool for extremist groups.”