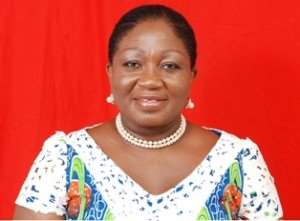 The Asokwa constituency branch of the New Patriotic Party has denied the existence of any Youth Group called “Asokwa Deserves Better” describing them as a “Ghost Group”.

In a release signed by the constituency Youth organizer Frank Bosompem Danso and his Deputy Enoch Boateng, the known and accepted Youth office of the constituency listed several projects undertaken by the Member of Parliament whom they describe as the best MP in the history of Asokwa.

The unending list includes projects undertaken by Mdm Patricia Appiagyei since she became MP of the constituency.

Read below the full statement from the Asokwa NPP Youth Organiser and his Deputy.

The Leadership of the Youth Wing would first of all state categorically that there is no such group registered under the Asokwa Constituency Youth Wing to talk about the entire Secretariat neither are the executives of this group part of the youth wing.

Most issues raised by the group in their communique are false,

We would like to state categorically that Honourable Patricia Appiagyei together is the best Member of Parliament in the history of Asokwa politics.

We would like to highlight some projects of the Honourable Member Of Parliament;

Every year a Free Vacation Classes is organised for students within the Constituency (last year alone about 3500 students benefited from this classes),about 1000 students have benefited from the MP's scholarship fund,ICT centers and libraries are renovated and well equipped (ie;Ahinsan, Asokwa,Gyinyase,Atonsu,Kyirapatre), classroom blocks built and renovated (Shakuria(Atonsu),Ahinsan,Kaase,Dompoase etc) Donations Of learning and teaching materials to schools within the Constituency both private and government schools, Presentation of Mono Desk to schools, Donation of School Uniforms and Sandals to Students, Building of Washroom for St Martin de Pores School, lobbying for the School feeding to capture more schools in the Constituency.

Though the issue of roads has been a big challenge confronting the whole nation but through the good lobbying skills of the Honourable Member Of Parliament Asokwa roads are been captured under the Sinohydro deal,Secondary City Project and others are in the hands of contractors (Kuwait nasona is the contractor handling it,Nahinso is also in the hands of a contractor who has started work.

The Honourable Member Of Parliament has constructed a soccer pitch at Ahinsan and also sod cutting has been done for the construction of an Ultra modern Astro Turf Soccer Pitch at Agogo South Electoral area,She has over the years donated sets of football jerseys,balls among other football equipments to the various soccer clubs in the​ constituency,Sponsoring Soccer Competitions been organised in all Electoral areas.

The Honourable Member Of Parliament has constructed Ultramodern Toilet facilities in about all 12 Electoral areas within the municipality with others too in the hands of contractors.

Every year the Honourable Member Of Parliament donates streetlight bulbs to all Electoral areas.

The Honourable Member Of Parliament has expanded the Kumasi South Hospital Maternity Ward, A new Maternity Ward is been constructed by MP at Kumasi South Hospital(Agogo), Donation of Health equipments to various health facilities in the Constituency,Lobbing for the construction of the Kuwait Aprabon Chip compound,Free Nhis cards for more than 700 individuals within the Constituency.