Akufo-Addo Enskinned ‘Chief For The Poor And Vulnerable’ 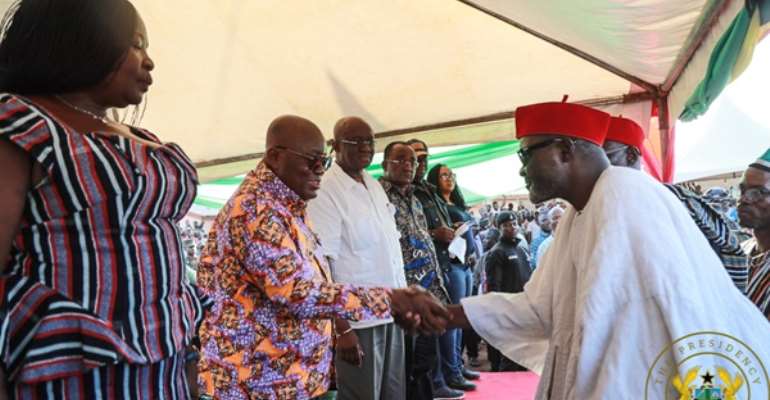 President Akufo-Addo has been made chief for the poor and vulnerable in Fumbisi in the Builsa South district of the Upper East Region.

The Chiefs and people of the Builsa South conferred the title on the President.

According to the Paramount Chief of Fumbisi, Nab Clement Akanko Anyatiuk, the decision taken to confer the title, Aniwoba Nab on President Akufo-Addo is in recognition of the fact that “most of your policies are geared towards helping the poor in society, that is Free Senior High School, Planting for Food and Jobs, amongst others.”

The Chief made this known on Wednesday, 14th August 2019, when the President took his 2-day tour of the Upper East Region to Fumbisi.

Nab Clement Akanko Anyatiuk stated that “the introduction of the free SHS policy has, without doubt, relieved parents of heavy financial load that has been making parents stop the education of their children.”

The Free Senior High School policy, introduced and implemented in 2017, will, from next month in September, have all students from SHS 1 to SHS 3 being its beneficiaries.

In all, 1.2 million children will be enrolled in High Schools across the country under the policy, making it the largest number of students so enrolled in the nation's history.

The Government's flagship programme for the revival of Ghanaian agriculture, dubbed “Planting for Food and Jobs” is ensuring that one million farmers are receiving improved seeds, the supply of subsidized fertilizers, the provision of dedicated extension services, a marketing strategy and the use of e-Agriculture.

“It is important to state that the Chiefs and people wish to declare their total support and co-operation to your government for the development of the district and nation at large. We have the confidence in you and trust that you will pay special attention to the district to enable us to catch up with other districts,” the Chief added.