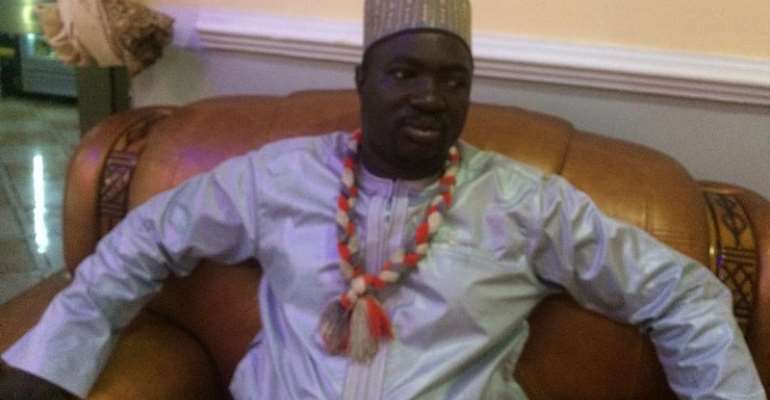 The North East Regional Chairman for the ruling New Patriotic Party (NPP), Mr. Fuseini Nurudeen has said the party is poised to win all the six constituencies in the region to increase the party's number of seats in Parliament come 2020.

According to Chairman Nuru, the party, through its executives, was working hard to attract more votes from the three orphan constituencies that were not the strongholds of the NPP to ensure that, they win that in addition to the already three seats they have in the region

Mr. Fuseini Nurudeen said this when he interacted with Journalists at his residence as part of his 2019 Eidul-Adha celebration and message to the people of North East and Ghanaians in general.

He noted that, the North East Region has six seats of which three: Yagaba-Kubori, Yunyoo and Cheriponi are orphan constituencies currently occupied by the opposition National Democratic Congress (NDC) but explained that the ruling New Patriotic Party (NPP) was and would be well-positioned, attractive and visible to the electorate in the region especially the rural communities as the 2020 polls inched closer in order to recapture their seats and snatch those occupied by the opposition NDC.

" I don't think there will be a seat that we will sit down and allowed the NDC to take it. If you look at the strong grassroot, the educated people Mampurugu His Excellency Dr. Mahamoudu Bawumiya is pushing them, he is giving them jobs and there are lots of opportunities, so we should be grateful to them (NPP)," he posited.

He stated that the Mampurigu land is grateful to the Nana Addo-Bawumiya led government for its continued support to the people of the region, and pledged that come 2020, the region will be giving NPP a 100 percent votes

The vociferous politician counted the creation of North East region, supporting farmers and improving infrastructure in the Mampurigu area and many more developmental projects that the party has embarked on for the region.

He used the opportunity to appeal for unity among party supporters in the region because he believed unity was one of the many strategies to win the 202 elections.

He also advised party supporters to rally behind the leaders of the party especially their son, Dr Mahamood Bawumiya so that the NPP will again defeat the main opposition party NDC in the 2020 elections

Mr. Nurudeen also urged the party supporters to guard against all forms of divisive tendencies and to remain united in order to make the party popular in the area

"We have to come together, unite and work hard to move the party forward," he said

He hinted that the constituency executives of the party would soon embark on education programmes in the rural and urban centres to drum home support for the party and counteract the falsehoods by the National Democratic Congress that are aimed at creating mistrust between the people and the ruling government so that their dream of winning all seats in the region will become a reality.

‘50% + 1’ To Pick President Is Constitutional Misrepresentat...
28 minutes ago