Security At Its Lowest Ebb As Violence And Fear Grip Ghanaians 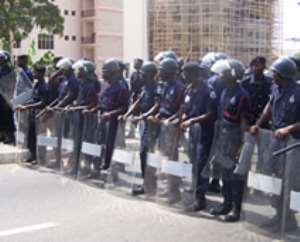 For several decades, Ghana was considered as one of the most hospitable and peaceful countries in the world. One could go out to work or discotheque in the night and walk home safely at dawn. Buses carried passengers over long distances without being attacked by armed robbers. Taxis operated throughout the night. During those years, tourists had trust and confidence in the peace Ghana enjoyed and flocked the country in their numbers. Can we say the same for Ghana today? A country where violence, rape, murder, kidnapping, car snatching, and accidents are the order of the day?

Since 2018, more than seventy people have been kidnapped. Ghanaians are very worried about the rising number of kidnappings. There were kidnappings that attracted the attention of all Ghanaians and international media houses. Three girls were kidnapped in Takoradi. For more than a year these girls have not been found and rescued. There are rumours that the Nigerians who kidnapped them have taken them to Nigeria. The police insist the girls are still in Takoradi. Recently, the police found three skulls under a borehole near the house of a suspect, and they are going to examine whether they are those of the kidnapped ladies.

The rescue of the two Canadian girls within two weeks from the hands of their kidnappers by the Police, gave mixed feelings of victory to the Police but doubts and unhappiness to Ghanaians since the three Ghanaian ladies kidnapped more than a year ago have still not been rescued. Many people feel the police have not searched for these girls with all the seriousness it deserves. However, anytime a foreigner is kidnapped the police approached the rescue mission with zeal and within a short time, the foreigners were rescued. Why can't the Ghanaians be rescued too?

The police were quick to explain that the news came to them more than a week after the girls had been kidnapped making it difficult to trace their hiding place. Dear reader, do you believe the police will ever be able to secure the release of these girls?

A crime closely related to kidnapping is baby or child snatching. In 2018 more than 40 babies and children were snatched from their mothers and from the compounds of their parents and along the roads to and from their schools. Edna and her sister traveled from Kumasi to Accra. At the Neoplan station, Edna's baby cried uncontrollably. A middle-aged woman approached with a smile and offered to help with the baby. Edna gave the baby to her. Edna and her sister decided to go find food for themselves and the baby. The well-dressed woman carried the baby and followed them. Edna and her sister queued for food while the woman sat down with the baby while overseeing their luggage too. The two girls returned only to find to their surprise that she had bolted with the baby and the luggage.

In another development, a woman who lives in Kasoa with her two children left the children and rushed to a shop nearby to buy provisions. The little boy who was seven came to the compound to play. He was abducted by two men believed to be Nigerians. When the woman arrived, an eye witness who lived nearby said she saw the two Nigerians who lived in the neighborhood entering an uncompleted house with her son. The eye witness led them to the uncompleted building. To their surprise and dismay, the child was found dead, his tongue and private parts removed. The suspected Nigerians were arrested. Dear mothers, never leave your children at home unattended to.

Rape which was virtually unknown in Ghana in the 1980s is today prevalent in Ghana. Victims of rape are normally six years and above. We have never taken this crime seriously. Ghana doesn't have proper records of rape cases. This is because many rape cases do not come to the attention of police. Sometimes the rapists kill those they rape and it is never recorded. A major hindrance for statisticians is the family heads and chiefs of towns and villages who keep the case away from the police and courtrooms. The statistics on rape in Ghana are unreliable.

Contract killing has become rampant. The latest one happened on the 30th of January this year 2019, when the investigative journalist and member of Tiger Eye, Ahmed Hussein-Suale, was attacked in Madina while on his way home by men on motor cycles. Typical of the police and the entire security system they still have no clue as to those who committed the heinous crime.

In another contract killing, the Marketing Affairs manager of the Ghana Harbor and Ports Authority was shot dead by an unknown assailant. A suspect was arrested and later granted bail. No one knows whether investigation is still ongoing.

Earlier before NPP came to power Honourable J.B Danquah was killed while asleep in his room. People are not safe even in their bedrooms!

Armed robbery is another crime that has exposed the weakness of the security system of Ghana today. In Brong and Ahafo alone, at least twenty cases of armed robbery have occurred on the major roads this year. Lorries were attacked and passengers plundered of their goods and money. Those passengers who resisted were shot dead by criminals. Armed robbers who break into people's homes have created fear among Ghanaians. These days the robbers break into your room and take whatever possessions they want from your house, sleep in turns with your wife and often kill the man and disappear from there.

There is the funny case of a house that was burgled in broad daylight at a suburb of Accra by well-armed robbers. Onlookers reported that the house was so huge and well-furnished that the armed robbers required almost one hour to complete the job! The police were nowhere to be found. They came when the thieves had bolted.

Interestingly we have a whole ministry of Security, another minister of security at the presidency. There is EOCO, CID, BNI and the police. With such security systems in place, one would have expected security to be high in Ghana. But since the government has lost grip of security, contract killings and other crimes will be on the ascendancy. If nothing is done, even the police will continue to be victims of insecurity.

It is the belief of many Ghanaians that the NDC party is behind the violence, confusion and the generation of insecurity and fear in Ghana. The ruling party believes that the NDC have resorted to criminal and violent tactics as a calculated attempt to create mistrust for Nana Akufo-Addo so that voters will reject the NPP.

For security system in Ghana to be strengthened and respected, I will suggest that the court system must be strong, fearless and unbiased. Parliament must enact a law that will ensure that whenever a criminal whose crime or intention breaches or exposes the security of the state, the judge must ensure that the case cases concerning such criminals must be treated with the urgency and seriousness it deserves. Within a week judgment must be given. Nana Addo, do something now!